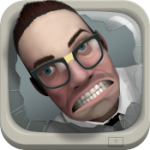 It’s time to take a bite of the reality sandwich. At the end of the day, office worker bees can only put out so many fires and circle back to so many tasks before they need to table their workload and develop a more synergistic flow. What I mean to say, I think, is that you need to loosen your white collar, grab a foreign object, and smash your office to smithereens or risk becoming a lifer who goes postal or, worse, stares mindlessly while muttering about a stapler.

The prototypical office drone you play in Smash the Office (Free) has done just that. Reduced to a gibbering mess by unrealistic time tables, micromanagement, office jargon, and conversations that no doubt began with “Workin’ hard or hardly workin’?", your character takes up the nearest blunt instrument and sets out to raze his workplace to the ground.

Each level drops you in a standard nine-to-five office setting replete with cube farms, servers, computer, and other office gear. With a club in hand, you have exactly one minute to earn a high score by smashing and bashing everything in sight. Once you’ve, uh, taken the meeting offline in one room, break down the door to move on to the next room of breakables. 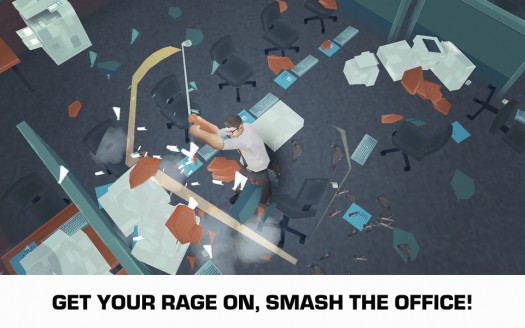 Reducing offices to rubble is quite fun due to variety of power-ups and high-score opportunities along the way. Some rooms offer power-ups that double your speed or score, freeze the clock, or turn you into a Tasmanian Devil-like whirlwind of destruction. Certain objects such as water coolers are worth more points than your average filing cabinet, so you’ll learn to cut a path toward the door that steers you toward big-ticket items. To crank the chaos up to 11, make a beeline for the fire extinguisher near each door. Whacking it triggers an explosion that wipes out everything in a large radius.

Along the way, you earn tokens that you can cash in for power-ups at the end of each level. Depending on whether you boost your speed, strength, or luck, you’ll move faster, hit harder, and cleave a path using fun bonus weapons such as baseball bats and light sabers. What white-collar, pencil-neck geek (present company included!) doesn’t want to wreck the boss’s office with Luke Skywalker’s weapon of choice? The graphics and sound complement your single-minded appetite for destruction.

Watching office flora and fauna disintegrate into splinters and shards, and hearing monitors pop and desks crumble, kept me craving more–but only in short bursts. You don’t venture outside of offices, and why would you? Smashing offices is the name of the game. Still, moving through the same rooms, regardless of the various configurations of furniture and equipment, gets repetitive after 10 to 15 minutes.

I should also mention that I experienced occasional slowdown while playing on my iPhone 4, especially when I detonated fire extinguishers. Which was all the time. The game is playable, but newer iOS devices will likely provide a smoother experience.

My technical issues due to playing on an “older" device aside, brevity is the beauty of Smash the Office. The game is mostly mindless, but that makes it the perfect time-waster when you just want to smash things–real things, things you have to soldier through every day for eight hours and a lunch break–for a few minutes here and there.