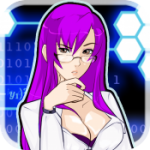 There’s nothing I love more than a well-executed iOS RPG but there always seems to be an issue of balance in regards to presentation. On one hand, an emphasis on exploration and side quests (as well as the grind) act as throwbacks to the roots of the genre. Meanwhile, streamlined gameplay  and simplified battle system are seen as an evolution towards the current mobile scene. BoxCat’s Nameless: The Hackers ($7.99) is squarely in the latter camp. Eschewing a lot of the standard tenets for an RPG, Nameless focuses primarily on grinding and cutscenes, leading to a somewhat monotonous overall experience despite its decent battle system.

Nameless follows a group of ragtag hackers as a few innocent jobs turn into the unraveling of an increasingly complex tale of worldwide control by the corporate machine. Unfortunately, the actual weaving of the tale in Nameless isn’t as interesting as my synopsis makes it out to be. The story is told through anime-inspired cutscenes with a lot of the actual advancement of narrative taking place between a load of fetch quests. While the story itself should be compelling, I found the actual writing to be a bit bland. 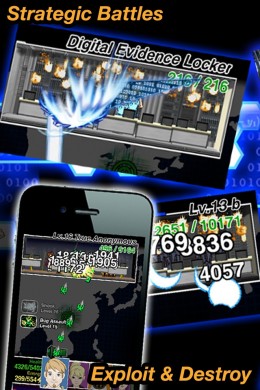 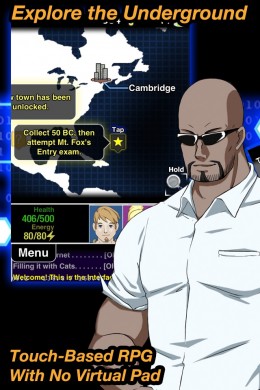 One area that Nameless did get done well is its overall turn-based battle system. Generally, battles are streamlined, easy to control and relatively fast. Each character has a variety of special moves that expend a certain amount of ‘Energy’ to use, with powerful moves requiring more energy. Completing battles earn two types of currency: ByteCredits (BC) and ResearchPoints (RP). While ByteCredits serve as the standard currency, ResearchPoints are rarer and used to upgrade weapon skills.

While Nameless doesn’t use an experience/leveling system, I found its InfoCards system to be a lot more interesting and a better alternative. Players can earn a variety of InfoCards via battle loot, store purchases, and hitting story objectives. InfoCards all have base stat increases, which can be upgraded by increasing the card’s rarity. Rarity can be increased by spending BC or RP, and “rolling," which randomly changes the InfoCard’s rarity. While BC rolling is automatic and you’re stuck with whatever you roll, RP rolling allows you to choose between the new and old rarity and typically gives a you a higher chance of getting a more rare card.

You’ll be spending a lot of time rolling for rarity as InfoCards are the primary method of getting more powerful. Some cards generally increase attack power while others allow you to upgrade your total health and energy or (most importantly) give you the opportunity to upgrade your weapon skills. I thought the InfoCard system was a nice twist on standard RPG progression as the random element of upgrading your cards have the potential to give some interesting results.

The battle system described above makes for a good foundation for an RPG. Unfortunately there’s really nothing else to do in Nameless besides the battles. There’s very little in terms of exploration, and ‘side quests’ are basically battles with foes that are a little stronger than the random battles encountered. Since there isn’t much else to do, I found Nameless to be a bit tedious, especially towards the latter part of the game whiere grinding becomes less of an option and more of a prerequisite.

Make no mistake, as an RPG Nameless is about as streamlined as it gets. Unfortunately, it doesn’t quite hit that exploration/battle balance that’s important for preserving interest.  Since there’s very little in terms of exploration or discovery, all that’s left is the battle system. While the InfoCard system and upgrade scheme are compelling, the actual battles tend to become too repetitive and too plentiful. If you’re into grindfests and don’t care much for story, I’m sure Nameless will certainly suit your fancy. For everyone else, the lack of depth past the battle system may be off-putting.