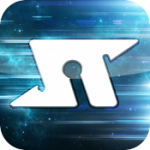 Like many gamers, my three best friends and I have a long-standing gaming tradition. Every holiday, we gather for our perennial New Year’s Eve LAN party. In an ideal world, we tear down our gaming rigs on New Year’s Eve, drop them off at one friend’s house with plenty of space, go to dinner at our favorite Tex-Mex place, and then ring in the New Year over a good 8 to 10 hours of gaming nirvana fueled by salty snacks and sugary drinks.

The reality usually played out differently. After several years of frustration caused by out-of-date drivers, lost game discs, forgotten Steam passwords, and bizarre network anomalies (what exactly is a network bridge, and why did it only appear on my Win98 machine?), we threw up our hands and downsized to Nintendo DSes and Mario Kart. This past weekend, the gang got together ahead of schedule and downsized even further.

Armed with our iPhones, we listened to the ranting of one friend who insisted we play some iOS game called Spaceteam (Free). In preparation for the meet-up, I downloaded the game and perused the list of features. They included teamwork, shouting, confusion, and four-stroke pluckers. Being a big fan of three-stroke pluckers, I could only imagine what fun it would be to tinker with four. I was not disappointed. 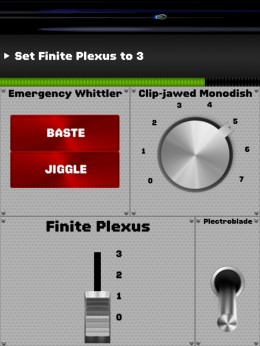 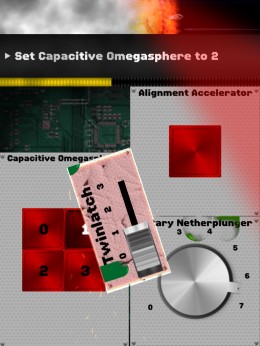 The first thing you should know about Spaceteam is that it only supports local co-op play. Unless you’ve got a few friends handy, the app just sits there, as out of reach as a four-stroke plucker. The reason for co-op-only play became obvious as we entered our first game. Each player receives a control panel littered with dials, buttons, and sliders. An instruction appears on your screen, telling you to use a certain control. Maybe you have that control, but maybe you don’t.

If not, you’ll need to shout out the instruction–set some dial to 5, enable or disable some switch, and so on–and hope the friend who does have that control can take action before time runs out. All the while, your friends are also receiving and yelling instructions while working frantically to complete instructions you and others are jabbering on about. Survive one sector and you progress to the next, receiving a new randomized control panel just when you were starting to feel comfortable with the last one.

A few sectors in and the action turns fast and furious, turning Spaceteam sessions into rollicking bouts of shouting, laughter, and frantic screen mashing. Some of the controls have real names, but most are pure made-up techno jargon; you’ll have as much fun shouting out “Flush the four-stroke plucker!" as you will actually flushing the thing. Many sectors also throw anomalies at you, such as replacing text with symbols–“Enable the thing that looks like a directional pad!"–and warp holes that make your screen undulate like a belly dancer.

Panels pop off, sludge oozes over your controls, and electrical shorts render some panels unusable. You can wipe away the goop and slide panels back into place, forcing you to juggle making repairs, twisting your phone upside down to escape a warp hole, completing instructions, and belting out orders. It’s a riot and an absolute blast, as our forum readers can attest.

After suffering abject defeat a handful or so of times, we attempted to devise a system of communication to maintain order and complete instructions more efficiently. Rap the table if we had a particular control so the party knew to direct repeated commands at that player, say “I second that" when two or more players received the same instruction, say instructions in a clockwise pattern around the table to avoid talking over each other, drop unnecessary words such as “set" in “set shiftsanitizer to 1." Some strategies worked early on, but by sector 5, we were all receiving so many instructions that we could almost feel the game compelling us to break away from our strategies and return to yelling and grunting.

And that’s as it should be. Your ship will inevitably break apart, and you’ll have just as much fun recalling the more amusing commands–“make sandwiches" and “eulogize former team" were our favorites–before diving right back in for another round of shouting. Go ahead and give it a try. Spaceteam is fun, free, and guaranteed to be a hit at your next get-together.