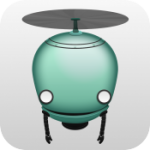 There are very few motifs out there that haven’t been beaten nearly to death by a deluge of games crafting variations of the same story. Zombies. Pirates. Ninjas. And yet, I’ve somehow maintained a soft spot for the story of the well-meaning robot caught up in something bigger than itself. Whether it’s a brilliant point-and-click adventure like Machinarium ($5.99) or the frantic puzzling of Robot Wants Kitty (Free), I can’t say no to the task of taking care of something cute and artificially intelligent. So it’s no great surprise that when I heard Teotl Studios was bringing their well-received head-scratcher Unmechanical ($4.99) from PC to iOS, I had my download finger at the ready.

Set in a mysterious, subterranean expanse, Unmechanical follows a plucky propellor-equipped robot on a mission to bring life back to a place long-forgotten. Armed with only one ability – the power to emit magnetic rays that allow you to carry objects, lift latches, and power switches – you zip through a series of interconnected rooms and pathways, slowly coming to understand what you’re doing, and where you are. What stood out immediately for me was the way the game’s vague narrative leant itself to a mobile port. 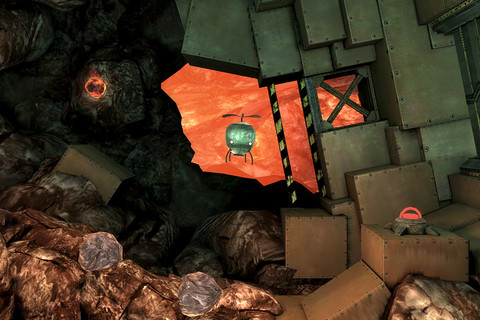 Scenes are shot in a purposefully limited field of view, forcing you to fly slowly outward to the walls of a cavernous room too understand its scope, take in its many machinations, and gain a sense of your surroundings. Looking down on the scene as it rests between your hands within the confines of a phone or tablet screen helps immerse you in the unknown, giving off the sense that you – like your spinning protagonist – are under the microscope.

This oscillation between a sense of both discovery and ambiguity is maintained in the puzzle structure, where Unmechanical truly shines. What seem at first like tenuous, disconnected elements of a sprawling space soon give way to a clear goal, albeit one that seems massively difficult. Yet by testing, investigating, and probing the scene, you see see a small, simple first step. When you take that first step, suddenly the path forward seems a little clearer, a little less uncertain, and a bigger picture takes shape: one that you couldn’t see before. Clever, tangible puzzles based around levers and switches soon take their place in larger, multi-part mind-benders that reveal their scope as you progress. Watch out for a particularly satisfying sequence that seems like it begins with a one-off test of refracting lazers, which comes full circle to deliver a hugely satisfying challenge many screens later. 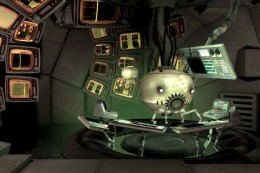 The whole experience is tied together with controls whose simplicity have me torn. On one hand, the boiling down of the Windows version of the game – complete with its controller control option – to two key gestures, is hugely admirable. Resting your finger on the screen and dragging it where you’d like to go handles movement, while tapping the character turns its magnetic function on and off. The massive diversity that Teotl Studios eeks out of that combination serves as a compliment to the game’s overall elegance, and very rarely feels forced. Things do, however, feel occasionally spotty in ways that can frustrate. A demand for precision when it comes to the magnetic field, and some imprecise hit boxing for turning it on and off all result in actions being repeated, or solutions being botched needlessly.

To that end, not all of the game’s smaller challenges fall down on the right side of that divide between logic and experimentation. A handful of sequences feel altogether too rote, and the ensuing “puzzling" amounts to a lengthy sequence of carrying and dropping. Meanwhile, a couple roadblocks seem to lack any rhyme or reason, and fall down on the side of tiresome trial and error. Make no mistake: Myst ($6.99) junkies will enjoy whipping out a notepad to do some detailed cataloguing, but the sparing nature of these types of puzzles makes them feel out of place and at odds with the game’s otherwise consistent tone.

That, ultimately, is what helps Unmechanical rise above the kinks in its own machinery to stand out as a deep, satisfying experience: a tone and game world worth exploring. On a platform focused so misguidedly on “replayability," the game’s gorgeous setting, subtle story, and (mostly) wonderful puzzles make it something better – deeply playable. Huge kudos to Teotl for flexing their acrobatic skills with Epic’s Unreal Engine here on mobile as well, where even an iPad 1 is able to clunk its way through the entire game without crashes (though it’s not advisable given the graphical dip!). Fellow robot sympathizers, players looking for a mental workout, or anyone bitter their iPad still can’t play Machinarium: don’t let this one pass you by.