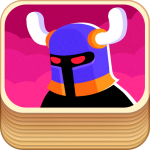 We had a chance to sit down with Matthew Hall from KlickTock, the studio behind Little Things Forever ($0.99) (and personal favorite ZONR ($0.99)) to check out his upcoming game, Deck War. It’s still early in development—only six weeks of a planned six month development cycle—but what Hall had to show so far is looking pretty great: colorful, cute, and a lot more active than your average collectable card game.

That’s because Deck War is a non-abstracted CCG. The cards don’t just represent creatures or armies or wizardly powers, they become creatures and armies and rather creaturely spells. Instead of carefully scrutinizing the cards on the field, you play your card, creatures pop out and they go to town against the enemy army. It’s the sort of card game Hall’s been looking for since the advent of CCGs on the app store, and that can be one of the beautiful things about developing games: if there’s an underserved niche out there, it’s always possible to be the one to fill it. 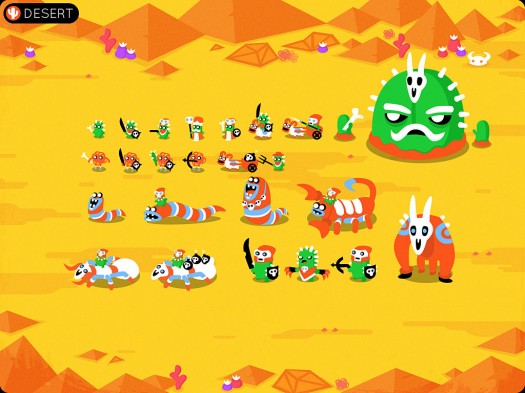 So here’s how it works currently: the player takes a card from his hand and lays it on the field. Troops go down at the side and start marching across the field to the enemy goal, and spells get placed directly where they’re being targeted. Cooldown timers keep players from spamming attacks and troops, but the field can get insanely packed with armies. So far there are only about a dozen cards in the game, but Hall expects to have around 200 available to unlock by the time Deck War launches. Players will unlock new cards by playing through single player missions, and the quality of the cards they’ll unlock depends on how well they perform. There will be purchasable booster packs available as well.

The bright, colorful style may seem familiar to fans of Hall’s Little Things series, but for this game he’s brought in artist Ben Weatherall, whose work you might have seen in games like Firemint’s Flight Control. They’ve put together several armies already, each adorable in its own way.

Hall tells us there’s an asynchronous multiplayer mode is in the planning stages. It’s a cool idea: players will build a defense deck that other players can raid. The defense deck will get an online ranking based on how many win and losses it gets. It’s sort of an ‘end game’ mode, with special cards as rewards. He’s also looking into the possibilities for synchronous multiplayer.

Single player is the big thing, though. Unlocking all the cards will take players across a sprawling, evolving campaign map and into combat with armies of all sorts.