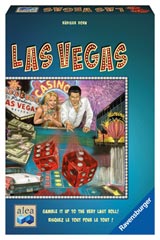 The studio behind Puerto Rico and a bunch of other brilliant board game-to-mobile ports, Ravensburger Games, has a new one coming down the pipes called Las Vegas. Appropriately, it’s a dice-based title that tasks users with rolling and then placing dice in different casinos in an effort to win the most money. (This’ll make a lot more sense after you see the video we’ve included from our demo at GDC.)

It’s plain that this is a much more accessible game than most of the other stuff we tend to see from Ravensburger, but that’s not to take anything away from its strategy angle — these kinds of games tend to have a ton of depth. Check it out:

Las Vegas is due out for iPad at the end of April.