With its comic book aesthetic, dark detective story, and double-layered title, the upcoming Framed is unapologetic in its noir influence. Somewhat less obvious is that this is the first independent project of three ex-Firemonkeys developers, who’ve teamed up to form Loveshack Entertainment.

TouchArcade was invited around to the Loveshack office in Melbourne, Australia for an exclusive first look at Framed. We sought to find out: what is this unique-looking puzzler about, anyway? What is independent iOS development life like after the Firemonkeys days of highly priced racecars and cheese-stealing mice? Can a narrative-driven puzzle game survive with free-to-play becoming such an abundant practice?

Our gameplay session was just ten minutes long, but polished and promising; it was the first six chapters of an eventual experience that lead coder Josh Boggs described as “movie-like,” both in its length and its mood.

“I had an idea of having actions that were predefined, and rearranging them so that the meaning would change,” Boggs explains. “In the narrative, the meaning behind a scene comes from the actions and context – so I wanted to play with the context, rather than the actions.”

Before me, an iPad showed me a sequence of images arranged in comic book panels – a key hanging from a hook, a door, a hatch in the floor, a bloodied body in a basement. Upon hitting the “play” icon on the first panel, our silhouetted hero began to move through the panels from left to right, top to bottom. He strode obliviously past the hanging keys, coming to a stop when he reached the hatch in the floor with no way to open it. 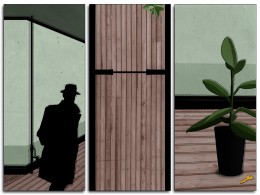 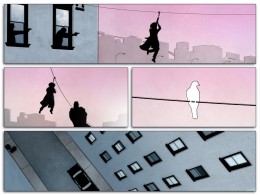 It was now my turn to rewrite the story. Two of the frames remained unmovable, as indicated by a small lock icon in their upper-right corners. This suggested to me that my goal in this chapter was to reach the body in the basement; it was up to me to reorder the actions to facilitate reaching this goal.

The remaining unlocked panels wiggled to indicate that I could move them. By dragging them around, I changed the order of actions. This time, the detective walked through the door, collecting the keys as he emerged from the other side, before proceeding to unlock the hatch and move into the basement to make his grisly discovery. Despite the wordless, purely graphical depiction of this detective’s journey, I felt oddly powerful, playing a part in the way his story panned out.

“There’s a strong undercurrent of narrative in there, but you’re never beat over the head with it,” Boggs says. “’For sale: baby shoes, never worn.’ Six words. There’s a narrative right there. We don’t need tons of dialogue or lore to communicate a powerful story to the player.”

Though this reordering of the panels is Framed’s current sole mechanic, Loveshack’s developers – whose collected previous game credits include SPY Mouse (Free) and Real Racing 3 (Free), as well as PC gaming classics Theme Hospital and Syndicate Wars – have been experimenting with other mechanics as they work on the difficulty and puzzle progression. The ability to rotate panels might be a future feature, as well as panels that expand when dragged into a larger area, revealing more context to the action they depict.

Boggs and his two fellow Loveshackers, Ollie Browne and Adrian Moore, left Firemonkeys recently following the gradual disillusionment they experienced in the year following the studio’s acquisition by EA.

“At Firemint we had a lot of creative control,” Boggs recalls. “Things got a lot tighter after we became part of EA. That’s business; I completely understand it. But I began to miss working in a smaller team.”

All three worked together on SPY Mouse, and though their staggered departures from Firemonkeys weren’t engineered with the intention of opening a new studio, their natural synergy saw them reunite early this year to work on Framed. 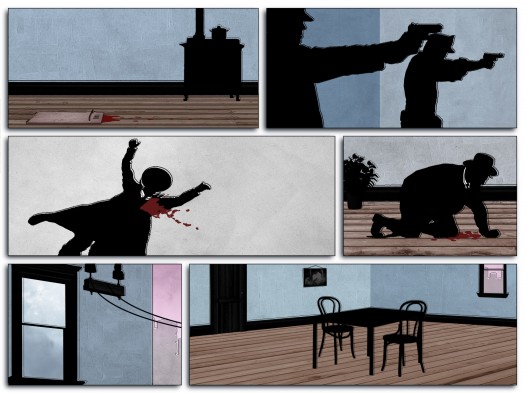 Still, it’s quite a leap, going back from a big-budget studio to the quiet indie scene. In the current terrain of free-to-play titles and in-app purchases, Framed represents a much more classic, refined gaming experience. It’s beautiful with its moody colors and elegant execution – but can it survive?

Browne believes that there will always be a place for a game like Framed.

“The music industry became free-to-listen a long time ago, and there’s still musicians surviving,” he points out.

“The free-to-play mechanic will never be massaged enough to where it’s not somewhat confronting to the player. But there’ll always be a place for premium games. Some people just want to be left alone to experience the game [without being interrupted by free-to-play mechanics].”

“You don’t need to dilute your vision to sell a successful game,” Boggs finishes.

Framed is currently on target for a late 2013 release. It’ll be available on the iPad and iPhone.