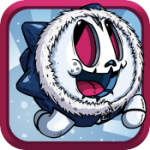 I told myself I’d go get lunch after getting through one more of Bobbing’s (Free) 86 levels. They’re short and sweet, once you know what you’re doing. It shouldn’t have been a problem. Twenty minutes later, I was finally done. Famished, but finished. I probably should have taken the break I promised myself—Bobbing is not a game to be played on an empty stomach.

It’s cute, colorful and quick, but it isn’t kind. Most precision platformers eventually let you get by on muscle memory. Repeat a level enough times and you’ll know it in your fingertips. Bobbing starts out that way, but it isn’t long before it becomes clear that Little Bobby Games has created something more ambitious. Each level becomes a maze, a puzzle that needs to be worked out as you go.

You wouldn’t think it would be all that complex. Each level is only half a screen high, and there are only two inputs to work with. Tap the left side of the screen to reverse gravity and the right to swap colors. It’s loosely familiar if you’ve played Polara ($2.99), at least up to that point. 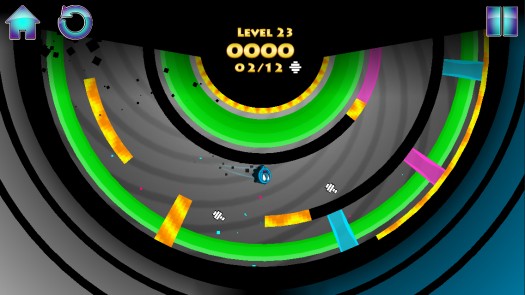 The levels rotate at a steady clip, so if your reaction speed is too slow you’ll find yourself shoved backwards. Fall too far behind and you lose, but slipping backwards for even a moment digs into your score and makes the game that much harder as you automatically rush back toward center. That slippage is, however, the least of your problems.

Of far more concern are the firey borders that line sections of the edges of every level, ready to kill with a touch. At first you just need to switch gravity to avoid them, running on the ground and then heading to the ceiling until you’re clear. Then the game introduces barricades colored in pink and blue. You’ll have to match colors to pass through them. That’ll get you using both sides of the screen. 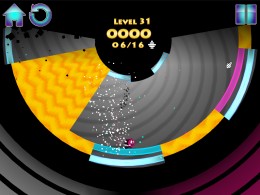 After that, it’s all about working with the features of the level. Portals whisk you from place to place—knowing how to react when you pop out is a big part of the challenge. New barricades that reverse your direction are introduced next. These are especially tricky, since the gems you pick up, which sort of telegraph your route, may need to be approached from the other direction if you don’t want to crash into a wall of pain. You either need to be able to tell at a glance whether a path is safe to approach at your current bearing or be incredibly patient with trial and error.

Then there are the barricades which instantly swap gravity— they send you hurtling back like they’re spring loaded. Touching them clears them away, so you may need to plan ahead to clear them out before they shoot you into the flames. Or perhaps you’ll need them further down the line to save your ass—sometimes you’ll need to fail before you know what it takes to succeed.

Failure doesn’t hurt, though. The levels are very quick, and the music—a fantastic set of electronic tracks by Sigmao—never quits. This makes death feel like part of the process, and recovery as simple as continuing onward. Precision platfomers that still don’t bother with persistent music are never quite as compelling. A quick spool backward without loading time helps Bobbing’s case too, and ultimately death never quite seems like a good enough reason to put the game down. A level skip would be more than welcome, however—sometimes you just keep hitting those walls.

If you’re not a prodigy, Bobbing’s 86 levels will take quite some time to work through. Just getting through isn’t enough, either. There are gems to collect in each one, and it’s painfully obvious that you haven’t truly mastered a level if you can’t get through it with all of them. Winning doesn’t feel like enough if you don’t win right.

It helps that Bobbing is stylish, with strong colors and great tunes. It’s the level design that really wins, though. Not only are many of the levels extremely difficult, requiring split-second reflexes and a good understanding of the terrain ahead, they’re also clever and hard to puzzle through. It takes a mix of brains and reaction time rarely required in its genre. Of course, Bobbing isn’t for everyone—you need to have the patience and mild masochism that constant failure and repetition requires—but if you can dig its viciousness, don’t be surprised if you start forgetting to put it down for less important stuff, like breaks. And meals.