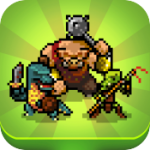 Heads up pen and paper role-playing enthusiasts or just anyone looking for a quirky new adventure: you’re going to want to check out Knights of Pen & Paper ($4.99) which is currently free for the first time ever. Originally releasing this past October, Knights of Pen & Paper is more about the theme of classic pen and paper role-playing games rather than trying to be a digital recreation of it. It’s literally a game about people playing a game, and it’s full of self-referential humor and references to the world of video games that will bring many a smile to your face.

Knights of Pen & Paper doesn’t ever take itself too seriously, and has an abundance of personality and charm throughout, which are big reasons why we enjoyed it so much in our review. There’s also a challenging battle system and more quests than you can shake a stick at, all jammed into a tight little package that feels very well-suited to the mobile gaming platform. It can be a tad grindy at times and the quests aren’t always the most creative, but these are minor shortcomings compared to all the things that Knights of Pen & Paper does really well.

You don’t have to be a diehard role-player – in analog or digital form – to get a ton of enjoyment out of Knights of Pen & Paper, and for free it’s definitely in no-brainer territory. Grab it and check it out, and don’t be surprised if its charms win you over. Also be sure to hit up our forums to talk strategies and hear new information straight from the developers.