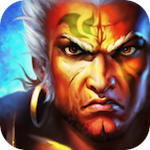 When it comes to character action games on iOS, there seems to be a perpetual battle between preserving the fast-paced combo-driven combat of the sub-genre with touch controls that typically aren’t conducive to the experience at hand. Unfortunately, Chillingo’s The Gods: Rebellion ($0.99) isn’t going to resolve that battle anytime soon. While the game looks great, offers a load of content and preserves that fast-paced feeling of character action titles, the controls leave a lot to be desired, keeping that schism of controls vs gameplay alive and well.

The first thing you’ll notice when firing up Rebellion are its impressive visuals. Utilizing the Unreal Engine, Rebellion features detailed (and occasionally moving) backdrops, nicely done combat animations and effects and a stable, fast framerate. While character models themselves don’t particularly standout, I was impressed with the game as a whole. 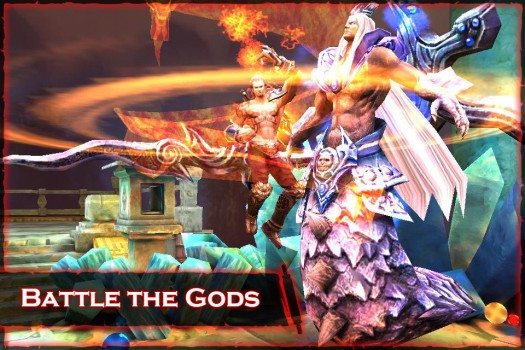 From a gameplay standpoint, Rebellion is as close to the character action genre as you’re going to get on iOS. You won’t find any puzzles or exploration here; Rebellion instead focuses on lots of enemies, lots of combat, and lots of combos. Each of the 7 levels are typically broken up in pieces where you move to an arena, the path forward gets blocked, and you fight a myriad of baddies until the game is satisfied and you move on. At the end of each level is a boss which with moves that require a bit more thought to process and avoid than the standard enemies.

As far as pure action is concerned, Rebellion is does a great job hitting its mark. Enemies are varied and cover all standard types (such as ranged, counter-heavy, light warriors, etc), each with a preferred manner of being dispatched. In addition, a perpetual experience system a la God of War allows players to upgrade basic stats and attacks (which unlock new standard combos) as well as new special moves that require a combination of attacks in order to pull off. These are all good tools because even on the easiest difficulty, I found Rebellion to be a bit on the difficult side, particularly when it comes to the bosses. The game also features a robust IAP system that allows you to buy health items, experience and new characters, each with their own different stat-lines. While Rebellion doesn’t feature anything particularly groundbreaking, what it does offer is executed well.

While Rebellion definitely hits the mark as far as possessing graphical flair and a solid combat and upgrade system, the most important question yet to be answered is how well it controls on iOS devices. Unfortunately, Rebellion‘s exclusive reliance on virtual buttons coupled with an inability to customize the scheme in any way definitely works against it. Players use a joystick on the left side side to control character movement, while the right side contains buttons for basic attacks, special attacks, blocking, and countering.

The biggest issue with the scheme as currently implemented is the fact that all the combat buttons are too clustered around each other, leading to a lot of miscues as you think you’re attacking and you block instead (especially since so many combos require use of multiple attack buttons). Even stranger, the counter button is bigger than the others and placed in a location where I imagine an attack command would be better placed. This lead to a lot mistimed counters during my playtime which just ended up being frustrating (especially considering executing a counter takes a few seconds, regardless of whether you actually counter anything). Finally, the lack of any control customization just boggles my mind, as even a system such as Gameloft’s (which allows you to move and resize any button on screen) would have gone a long way towards making Rebellion control better.

It’s a shame because the current control scheme, combined with the difficulty curve seems to want to push players towards purchasing the IAP health items and experience, when in reality simply fixing the issues would make the game far more playable (and enjoyable, to boot). As it stands, The Gods: Rebellion does a decent job recreating the character action experience on iOS in nearly every aspect save controls. If you have more patience than me (or are simply used to iOS character action titles) by all means check out Rebellion as it offers a lot in its other elements. For folks hoping this is the magical game that successfully merges combo controls with a touch screen, prepare to be disappointed.