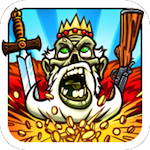 King Cashing 2 (Free) has a lot going for it, you might have heard. In brief, it’s one of those sequels that basically doubles down on what its predecessor did so well while layering a few notable, though kinda minor, iterative tweaks on top. This time around, you’ve got a bunch of new characters to work with, a much more refined leveling system, and new items and weapons to use to kill dudes. What more could you want as a fan?

If you’ve been out of the loop, the hook of King Cashing franchise is its pairing of RPG and slot machine mechanics. In battle, you spin a three-reel slot machine to beat up bad dudes. Whatever variables, including misses, land in the center, is what will happen. As you play, though, you discover that you can sorta bypass the randomization by just leveling up and making your guys so strong that it doesn’t matter.

Anyway, we’ve got some video of the game in action below. Definitely bang that link — this game has more going on that you’d think: