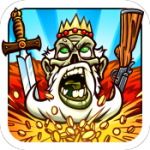 It seems like an eternity since King Cashing (Free) came out of no where in 2011. Combining a strong slot-machine battle system with a loose RPG system, King Cashing was a little rough around the edges from a presentation standpoint but absolutely nailed its combat mechanics, making it a sleeper hit amongst our forums. That same mechanic returns excellently preserved in King Cashing 2. With a refined leveling system, new characters, a wealth of weapons and items and a story told with an excellent visual novel style, King Cashing 2 addresses every issue I had with the original, making it a game that begs to be played.

If you’re unfamiliar with how an RPG with a slot-machine battle system works, I’d encourage you to check out our review of the original King Cashing. For everyone else, the same combat system that we loved before makes a return with some minor improvements. Players still participate in battles with cherries as the currency of choice for spinning the reels with the goal being to match up characters and weapons against enemies to cause damage. One new twist is the ability to eventually purchase a power-up that will a selected reel for one turn during a battle. Otherwise King Cashing 2 focuses less on innovation and more on simply adding to an already excellent system. 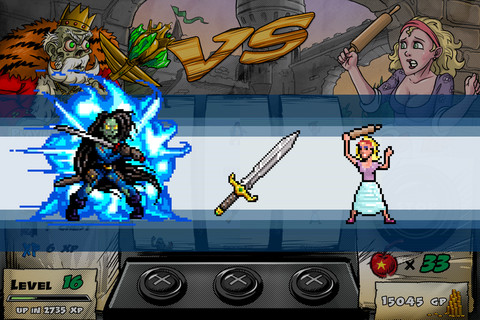 With only three character types and corresponding weapons, simplicity was the name of the game in the original King Cashing. King Cashing 2 looks to up the ante with a lot more variety. Players eventually unlock 7 characters, each with their own preferred weapons and critical bonuses. Weapons also continue the hit/damage trend of the previous game, meaning that the stronger the weapons is the lower its hit attribute is (meaning the less likely it’ll show up on a slot reel).

Some of the new weapons and characters are also pretty unique, such as the Necromancer, a relatively weak character that converts a ‘Miss’ reel into a ‘Human’ weapon with each hit. Another interesting addition is the potion weapon class which offers a wide variety of effects ranging from damage-over-time poison to armor damage, to enemy ‘bait’ (which temporarily adds more enemies to the reel). There’s also a wealth of new secondary bonus items which can be equipped to modify the slots even further. These new additions and options lead to a lot more different ways to play the game and go a long way towards formulating new strategies, especially as later enemies start to become resistant (and immune!) to more and more weapons.

The most impressive improvement that Productions Multimage has made in King Cashing 2 is in its visual style and narrative technique. Taking on an entirely different theme than its predecessor, King Cashing 2 employs a slick graphic novel style that does a great job of telling its tale. It also doesn’t hurt that everything simply looks amazing, with the game taking full advantage of retina visuals which are pretty essential for any game attempting to emulate comic-book visuals. King Cashing 2‘s story, meanwhile, is infinitely better than the original, telling a tale of an undead king awoken from his slumber and searching for gold. One minor complaint is the lack of full iPhone 5 support (borders fill out the extra space on the elongated device), but the game still looks great nonetheless. 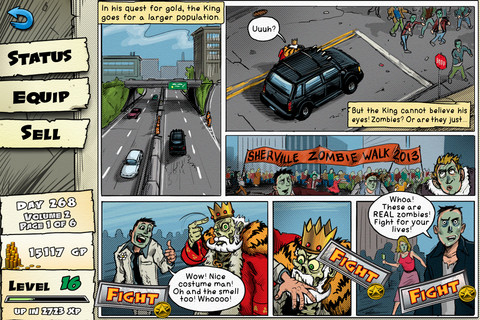 Most importantly, like its predecessor, King Cashing 2 is simply fun to play. Battles are streamlined and offer players the ability to play the game as one of chance or to focus on memorizing and individually stopping reels. Incredibly difficult enemies return as ‘side quests’ that offer quite a challenge. Achievements, ranking systems for each battle, and leaderboards that track how fast you complete ‘issues’ all return, adding some extra replayability. While the story itself is a bit short, the system in place makes it easy to add new ‘Issues’ with a future already being promised.

As I mentioned in the review for King Cashing, a slots-based RPG is certainly not for everyone, and there will undoubtedly be folks that can’t (or won’t) grasp the unique battle system. However, for folks that can, King Cashing 2 is the definitive title for the genre. Where the original at times felt like a nicely implemented tech demo, King Cashing 2 is an excellent game in its own right, improving on nearly every facet over the original and well worth checking out.