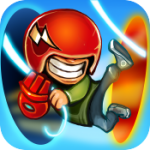 There are moments when Rock Runners ($0.99) feels particularly cool, when you dash through a kinetic, ever-changing landscape, dash from portal to portal and generally act like a total badass. But most players probably won’t reach those moments, because it can be a trudge to get to them.

It’s a runner, but not an endless one—it has dozens of levels across four different worlds. Or, well, four worlds. “Different" is a stretch. When you’ve seen one rocky cave filled with pipes and mining equipment you’ve kind of seen them all—particularly when things start to get a little loopy.

It’s uncomfortably obvious that Rock Runners‘ levels are made up of small segments chopped together, and it’s not unusual to run through the same segment a few times over in a given level. “Ah," you’ll think, “this is the bit where I fly through the portal, swing over the goo, land on the barrel and then swing onto the next platform." Or perhaps it’s the segment where the pipe you’re standing on falls and you fall with it, jumping and swinging away at the last second, or any number of other segments you’ve seen a dozen times before. 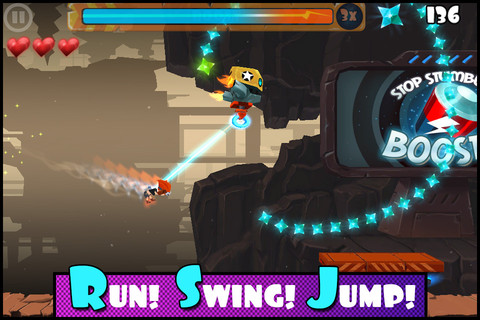 This economy of design hurts what is otherwise a pretty entertaining one-touch runner. You tap to jump, you tap to hook and swing, and when you’re doing well you simply fly through everything. It’s fun, that sense of inertia, though it can be hurt by the occasional performance stutter.

Wherever you run you collect gems, which happen to be currency, multipliers and speed boosts all in one. You keep the currency no matter what, but if you stumble—gracelessly bump into something for more than a moment—you lose the speed and the multiplier. This puts a high value on perfection, which is great. Playing perfectly is by far the most fun, so it’s good to learn not to screw up early on.

The first couple worlds are not only samey, they’re also incredibly straightforward. This keeps the difficulty curve flat for too long, leaving it to spike in the later levels. Those spikes are great, but they’re the only breaks from a lengthy series of levels that blur together, differentiated by nothing but their positions on the map. 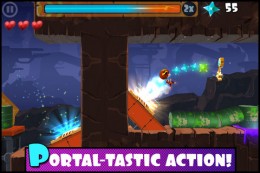 That map represents Rock Runners longevity. Your goal is to collect fuel canisters and make it to your ship in each world—how you do that is up to you. There’s no reason to explore each and every level when the direct route is best. But there are locked levels, and to get at them you need to collect keys. Or you can take the long way around. These are the choices you’ll face.

They’re relevant, because your place on the game’s leaderboards is established by how long it takes you to reach your ship. Not in a linear sense, though. You can clear every single level on your way through—Rock Runners will only count the most direct path you could have taken through the levels you’ve cleared to gather all the fuel canisters and reach the ship. Improving your times on those levels is paramount if you’re into leaderboard competition.

That’s the only time IAP may come into play. The game offers a few power-ups in exchange for your bounteous gems, but those power-ups are generally pretty pointless. When you’re gunning for a better time, though, something that can save you from a single stumble or from death could conceivably be quite handy. Still, if you can play perfectly you won’t need ’em, and they have limited charges either way.

It took me a while to warm to Rock Runners. It’s fast-paced and catchy, sure, but I have plenty of fast-paced platformers. Still, as things got tougher and levels got more complicated I started to pay it a bit more mind. And when I realized I could struggle to shave precious seconds off my completion times, I found myself rather hooked. Yeah, the levels start to blend together pretty quickly, but I’m so close to the par time in world three. And I have a couple hundred stars left to earn, and I just might want to earn them.

Recoil Games hasn’t come up with anything all that fresh or unique in the world of one-touch platformers, but Rock Runners has hooks that work. If the rest of the game worked as well, relied less on repetition and more on thoughtful level design, we might have something special. Instead we find ourselves with a runner that isn’t quite the same old thing, but doesn’t do nearly enough to stand out.