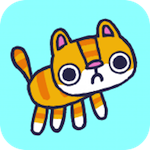 Remember when Hacky Sack was a thing? No? You didn’t attend school during the Jurassic period? Well, mash this into your Meat File Directory: Hacky Sack was a game that cool kids played during or between classes back in the day. It was like an intimate take on catch, except played with a beanbag, a group of people and, exclusively, the outer rim of your feet. The goal was to kick the bag back and forth for as long as possible. I’m not so sure what was so cool about it either, but I’m not Judge Awesome. Anyway, there is a neat new game on the App Store that riffs on Hacky Sack. It’s called HackyCat (Free) and we played it this morning. As you’d expect from the titling alone, it’s a quirky game that has you kicking digital cats and keeping them in the air for as long as possible. It’s a rad game, which is something I’m actually qualified to say, I think.

On top of nailing the core back-and-forth juggling, HackyCat absolutely kills it in the art and sound departments. This thing has the most adorable, almost excruciatingly cute, style. Also, it has a pretty sharp progressive unlock system that lets you grab new cats with rad powers as well as a very special new character.

This was one of this week’s Sleeper Hits, so make sure to check it out. Luckily, we’ve got some moving pictures to give you an even further heads up on this: