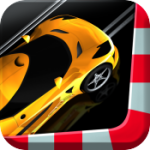 It seems like an eternity since SlotZ Racer initially debuted on the App Store. Back then, its attention to detail coupled with a (eventually added) vast track editor and multiple modes made it not only a great slot car title but also a fun racer. Fast-forward to today and SlotZ Racer 2 HD ($2.99) looks to bring back the enjoyment that its predecessor (now no longer on the App Store) once touted. While SlotZ Racer 2 is a bit disappointing as far as new things it brings to the series, the core gameplay returns untouched, bringing newcomers an enjoyable experience.

If you never had the opportunity of checking out the original, SlotZ Racer 2′s gameplay is based on the incredibly simple premise of its physical namesake. Players participate in a variety of races that take place on slot tracks. As you might expect, controls are limited to simply acceleration, with a simple tap-and-hold controlling speed. Thus, the key to success is to time your vehicle’s acceleration by speeding up on straightaways and managing speed and drifting on turns. It sounds simple, but SlotZ plays fast enough and has enough variety in its tracks to be enjoyable. 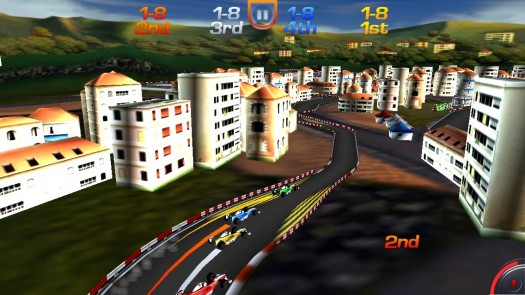 As far as game modes are concerned, SlotZ 2 features the standard modes found in most racers. While the majority will stick with championship mode (points-based racing tourneys), there’s also single race, time trial, and multiplayer modes. In addition, a decent car editor is available for purchase and allows players to utilize the points earned in championship mode to add additional stats to your vehicles.

While SlotZ Racer 2 HD doesn’t feature weapon combat and the actual racing doesn’t offer much in terms of variety, one area that the game does do a good job in is its track editor. SlotZ 2 features a pretty in-depth track editor, with the ability to clone and edit existing tracks and allows players to edit everything from track length and direction to scenery to even the backdrop setting. For players that become familiar with the editor, SlotZ 2 has the ability to keep you engaged with track creation for quite awhile. My only complaint is that it’ll take some time to actually become familiar with the editor as it can be unintuitive at times.

For a game that attaches the ‘HD’ tag to its name, SlotZ Racer 2 really doesn’t seem to do too well in the visuals department. While actual vehicle models do look crisper, benefiting from retina-enhancement that weren’t in the original, track models and environments look noticeably blurry and out-of-place especially when compared to the higher-res assets. This inconsistency extends to even the menu system which also looks blurry. In addition, the track editor also looks a bit messy, with occasional graphical artifacts and buttons that are hard to discern. Thankfully the game’s framerate runs at an extremely fast clip which is the most important aspect of a racer’s visual system.

The biggest issue with SlotZ Racer 2 HD is the feeling that we’ve seen this all before. Other than the expanded offerings in terms of maps and cars (as well as the corresponding extras in the track editor), SlotZ Racer 2 doesn’t offer anything new to the experience. That’s not to say what it offers is necessarily bad, but it’s more disappointing than anything else.

Even though SlotZ Racer 2 HD can be considered more of the same, it’s still an enjoyable virtual slot car racer. For those that didn’t have the pleasure of playing the original SlotZ Racer, this sequel is well worth checking out. For others already familiar to the scene, SlotZ Racer 2 might not offer enough new features to warrant investment. Fortunately, considering SlotZ Racer 2 HD is available for free, you can at least check it out before making a decision.