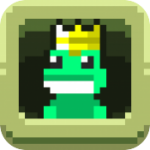 Have a love of adventure games and an hour or so to spare? You absolutely must take a look at Finding Teddy (Free). No, the name may not inspire confidence, but trust me, Look At My Game has published a real gem. It may not quite be the next Sword & Sworcery ($3.99), but that’s not for lack of beauty or heart.

It begins with a childhood nightmare, a teddy bear stolen by something monstrous from the closet. The wordless little girl that stars in Finding Teddy is brave and curious, though, and she ventures in after it. From there it’s a trip into a world of lovely pixels, terrifying creatures and magical music.

As with the best adventure games, the short time I spent with Finding Teddy was filled with moments of discovery. Some were of the traditional point-and-click variety—finding bits and pieces lying around and figuring out where they’re meant to be used. This is the mixed bag it always is. If you buy into the game’s logic all the pieces fall into place. If not, there are moments of dragging and dropping and aggravating experimentation. 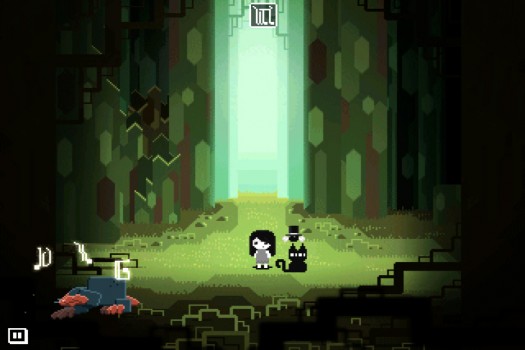 Those moments are blessedly few, though. Most of the game’s puzzles are musical in nature. At first this means listening carefully and echoing the sounds you hear—headphones are beyond recommended, by the way. As you solve each puzzle, you’re given a record of the notes you’ve used and repetition becomes just a little easier. Eventually you’ll become fluent in the music of Finding Teddy. For all it lacks in dialogue, it manages to communicate plenty.

Take the environments. As you travel through the game you explore verdant forests, dark caves and lots in between. Each has a mood to convey, something magical and dangerous in equal parts—something common to all the best childhood adventures. 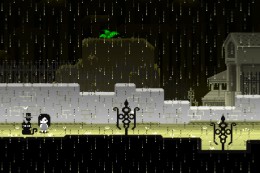 I don’t think it’s an accident that the palettes and designs recall Fez, a game with a similar tone of playful mystery. The creatures of the world are less playful, and call to mind the goriest of cautionary tales. Discover how to help them and they’ll be your allies in the task before you, but take the time to watch each gruesome death first. They help build a world I’d love to explore further.

That’s the kicker. An hour in the world of Finding Teddy, give or take, is painfully short. I’ve only just grasped the keys to the puzzles. There is more that could be done with the mechanics and the world, and I’d love to see how much further it could be taken.

If the mechanics are set aside, on the other hand, the length is just right. Finding Teddy has a story to tell, but it’s a short, heart-breakingly sweet tale. Hours wouldn’t add to that. I won’t spoil a thing, but there’s a message that carries through each encounter until the very last, and it’s a message that made me just a little teary-eyed when I finally noticed it. Padding could ruin that—related episodes, on the other hand, would be more than welcome.

A word of warning before you dive in: it sounds as though the developers are tracking down a few big bugs and crashes that are affecting some players. You may want to check out the free demo first. It will give the game a chance to charm you too, and it’s hard to imagine it won’t.

Finding Teddy is a delight and a surprise. It’s a game that could easily languish as a hidden gem of the platform, but it’s just as sure to be evangelized by those that play it. It’s an easy game to love, particularly if you’re a fan of point-and-click adventure. The story of a girl and her teddy bear may not seem like the must-play hit of the moment, but it has so much love to give. A little of your time isn’t much to ask in return.