Attention all aspiring fighter jet pilots, yesterday Sega quietly announced on their blog that After Burner Climax is rocketing towards a release on iOS. Originally released in 2006 as a sequel to the 1987 Yu Suzuki created cult-classic, After Burner Climax ushered the series into a modern era, first appearing in arcades complete with a massive cabinet and motion-capable seat before being ported to Xbox Live and PSN in 2010, sans fancy moving cockpit effects. 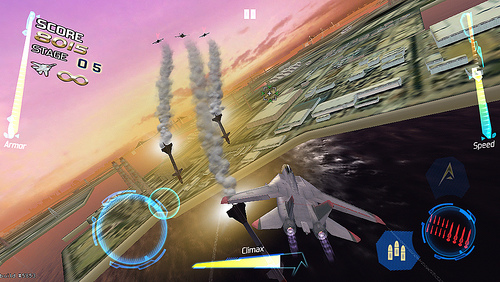 Sega is short on details about the iOS version aside from the single screen above, and it’s anybody’s guess as to whether After Burner Climax will feature any bells and whistles beyond its previous versions. Though, I think it’s a pretty safe bet to assume Game Center integration, and tilt-functionality seems like a no-brainer as well. We should know soon as Sega says the iOS version is arriving at “mach speed" and we’ll be sure to let you know when After Burner Climax hits the landing strip.