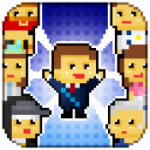 For a while now, I’ve been worn out on free-to-play sims. Tiny Tower (Free) and Dragonvale (Free) devoured my waking hours (and my phone’s battery), but then I grew listless. What’s the point, I thought, in clicking stuff to earn coins that just let you click more stuff? Pixel People (Free) has reminded me of something fundamental: it’s not the point that matters, it’s the fun along the way. LambdaMu Games has distilled everything I love about the freemium sim formula into one incredibly potent brew.

It doesn’t require an ounce of skill, but building a new society from the genetic matter of earth is a great way to pass the time. It’s the joy of discovery, you see. You start with a couple of jobs for your clones—mechanic and mayor. You stick them together and a third option comes out: engineer. Your new engineer has a name (something punny), cute pixel art and a quip about his imposed career. Then you wonder, hmm, what would happen if I matched up my engineer with my mayor? That’s when I knew they had me.

If that were all there were to Pixel People, we’d have ourselves a low-end Doodle God ($0.99). It’s not even a challenge, really, since the game shows you which jobs have viable combinations available. Poke through the list until you find something new and pow, a minute or two later and you’ll be rewarded with an exciting new job revelation and a host of new combos. 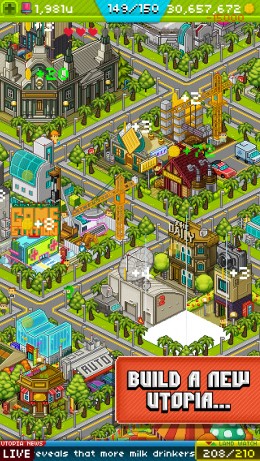 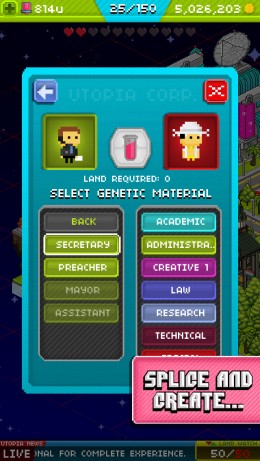 No, it’s the city building that turns this into something that will eat your life. Many of the new jobs require new workplaces. So you get your engineer, and in turn he gives you the plans for a Utopium Mine, which spits out coins every few seconds. Staff it fully and it spits out more coins. Once a day it even gives you a free utopium or two—an alternate path to collecting the game’s premium currency.

That’s Pixel People’s secret: you create new clones because you want to build up a colony in the ashes of human society, but also because some of their buildings have exciting easter eggs. Most of the game’s features are tucked into buildings you need to discover and build, in fact: the credits, the achievements list (and both of those things hide extra surprises), even an IAP option or two. The ability to upgrade your buildings is hidden in there somewhere. To build roads and waterways. To create multiples of buildings. It’s all out there somewhere, just waiting for you to find it. 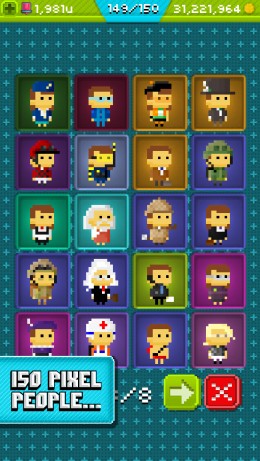 Normally when you play a game like this, progressing means unlocking new cosmetic options that may also improve your economy. Progressing in Pixel People means that, yes, but it also means a host of other surprises.

There are 150 jobs to find. By the time you hit 50 or so, you might be worrying that you’ll be done in a few days Then things slow down. Way down. By 100, each land expansion costs an almost ludicrous amount of money. Of course you’re earning something just a bit south of ludicrousness by that point, but the timers are longer, the houses are costlier, and land is so very, very precious that you may want to reconsider that cosmetic playground you put up in the early, heady days of wide open spaces.

Even at its chuggiest, Pixel People never feels all that aggressive about IAP. This could be because there’s always something to do when you launch the game. Buildings need to be poked to keep producing coins. Those timers keep going whether you’re playing or not. If you sit with the app open, your trees will also want for poking, and may occasionally pop out utopium. And then there’s the game’s other big goal: building love between your citizens.

“Love," in this case, is really just another excuse to push buttons and win prizes. A heart will pop up above a residence every few seconds. When you tap it you’ll be able to press another heart beside a pair of your citizens, ostensibly helping them find love with each other. When you collect enough of those hearts, you get a surprise.

Most of the time it’s coins—and let me tell you, while a 5000 coin windfall seems great at level one, it starts to lose its shine when the next land upgrade costs 30 million. Sometimes it’s sweet, sweet utopium. The rest of the time it’s animals. Yes, there’s a tertiary set of things to collect, and they’re adorable. They’re also random and repeatable, so catching them all will keep you going while after the jobs are filled and the buildings are built.

Listen, this is checklist gaming at its finest. You have to know there’s a feedback loop happening, one that gives you shiny, cute rewards in exchange for your hard-earned attention. But it’s comes it such an earnest, charming package that it’s almost impossible to say no. Pixel People takes an apocalyptic future and makes it hopeful, cheerful and bright—if it’s where freemium games are headed, we have a lot to look forward to.