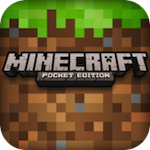 When a new update to Minecraft – Pocket Edition ($6.99) hits, we can’t help but wonder how many potential players aren’t playing this game. Minecraft is baffling for some folks; it’s not the best at expressing what it is and what you can do in it. And even when you do figure out that punching blocks yields resources, you’ve still got to figure out the whole living through the first night thing. And crafting. There’s a lot for the uninitiated to learn.

Try telling a friend about how to play Minecraft. Provided they haven’t seen it before, you’ll probably blow their mind. They’ll stop you and say, “uh what" a lot. And you’ll forget to mention a few things. There’s a lot of rules, stuff to build, and a lot of weird concepts to talk about, after all.

We maybe missed the boat a little bit, but we wanted to go ahead and just handle this issue in our own little way in light the game’s latest update. In this guide, we’ll be going over the basics of surviving and thriving in your first 20 or so minutes in Pocket Edition on Survival Mode. We won’t hit everything, of course, but we’re pretty sure that by following these tips, you’ll get a handle on how to roll in the game.

Your Fists Are Your Friend

So, you’ve just started a new world. Congratulations! You’ll probably die pretty soon, though, so don’t get too attached to this specific life. Go ahead and punch a tree. No, seriously — hold down on the screen and punch a tree. If you punch long enough, the wood will break and you’ll collect some logs. You’ll need these. 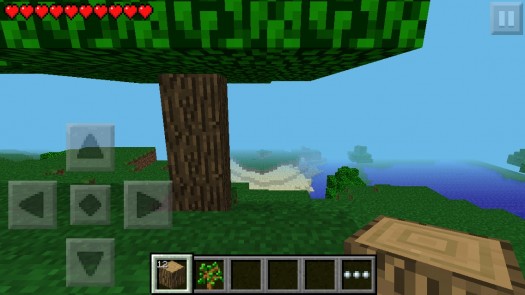 The Sun Is Not Your Friend

You’re working on a limited schedule here because, when it gets dark, zombies and other bad things will come out at night and try to eat your fleshy bits. Your goal for the first night is a simple one: dig a good-sized hole in the side of a mountain. We’ll get back to this in a second.

You can punch other stuff, too, including the ground. Notice how dirt drops dirt blocks and sand drops sand blocks? Resources, which are the end result of bashing something, can be crafted into items, which will allow you to survive and, eventually, thrive. But first you’ve got to get a crafting table for the high-level stuff.

You’ve got some logs. Hit the triple circle thing on your inventory bar. This is the crafting menu. You can build things from here. Click on the block at the top and look for “wooden planks." Turn your logs into planks. Now, turn a few of those planks into sticks. Piece of cake! 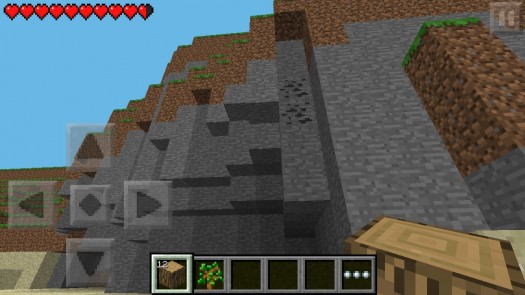 Provided you’ve got enough planks, you should be able to make a crafting table. This is where the magic happens. Make some wooden tools, first. Make a wooden axe, wooden pick-axe, and a wooden shovel. Axes cut wood faster than your fists. Pick-axes break down rocks quicker. Shovels churn through dirt quicker.

Coal Is An Even Better Friend

You thought your fists were important, right? Coal, which is dropped from gray blocks with black splotches all over them, is a way better friend. When combined with a stick, you can make torches. These allow you to see in the dark and keep the wicked away. The wicked being those dudes who want to eat you. Remember?

But Where Do I Find It?

Coal appears above ground, usually on the side of tall mountains. Stretch your legs a little bit and start walking around. Find a mountain. Get some coal. 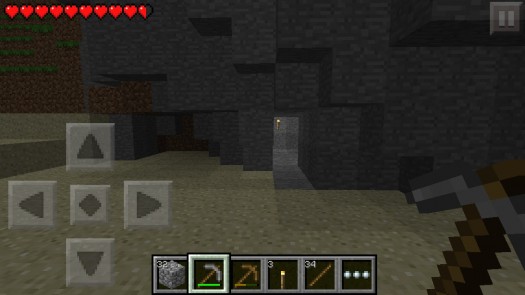 That mountain where you got the coal? Start digging into the side of it, maybe about five or six blocks deep. Throw a couple of torches in there. Congratulations, you now have your first home, your first dirt palace. It probably smells bad and, yeah, it’s not exactly an ambitious project, but it’s going to save your bacon when the sun goes down.

With Your Extra Time

Beat up some more trees with your axe. Crunch some rock with your pick-axe. Now, with these rocks you can make even stronger, more durable tools — tools with actual sharp edges. Iron and diamond are even better tools, but you haven’t started digging down.

Now It’s Time To Mine

Go back into your home. Use a couple of blocks to seal the entrance. This will keep the monsters away from you. Now, start digging down — not straight down, mind. Pretend like you’re making a dirt and rock staircase to Hades. This strategy makes it easier to avoid falling into a hole by accident. 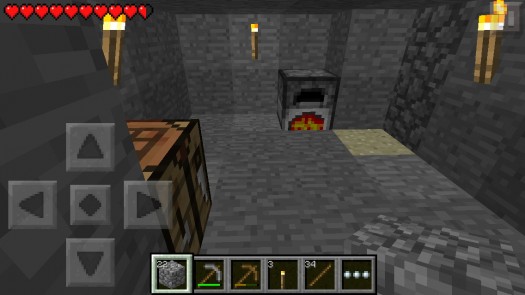 The point of mining is to gather more precious materials — stuff like diamonds and iron and gold. With these components, you can make armor, which dampens the amount of damage you take from monsters. You can also make stronger tools, as well as a sword. You’ll need a crafting table for this stuff.

You can also smelt sources to make better ones. A furnace requires a trivial amount of basic rock blocks. You should have plenty of those. Build one and click on it. Check out all the stuff you can make.

What Else Can You Make?

Lots of stuff. Beds, for example. You can make books and bookshelves and paintings. You can form bricks from bits of clay, if you build that a furnace. Sop and take note of all the things available to you via the furnace and table. You might be surprised by the sheer amount of things you can slap together. 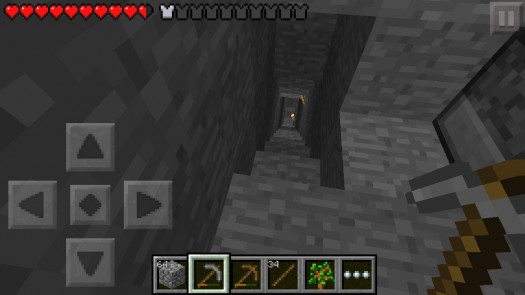 You’ve got the basics. You know how the world works, and you’ve got your head around the game’s twisted logic. Now, go build a brick house in the middle of a desert. Build a mighty sheep farm. Do whatever you want!

It’s hard not to get wrapped up in Minecraft. It’s an amazing game where you sorta shape your own survival narrative, while creating some awesome things along the way. Hopefully we helped a couple of you out there who couldn’t quite get past the learning curve of the first night.

If you’ve got any tips for new players, throw ’em into the comments. We’re sure folks will be thankful down the road. Also, if you’re a pro, don’t forget to check out the game’s latest update — the addition of armor, signs, and new blocks like, say, Smooth Stone is pretty exciting.