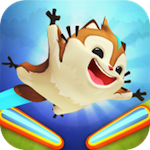 Earlier this afternoon, Jared and I sat down with Momonga Pinball ($1.99), a pinball game with an impressive layer of presentation slapped on top of it. In the game, you’ll play as a flying squirrel tasked with taking down a band of owls that sacked his village and, as if that wasn’t enough, kidnapped all the folks who were living in it. In practice, this boils down to flipping the squirrel into targets across a bunch of colorful objective-based levels.

Think pinball, but with adventure game sensibilities thrown in for good measure, and you’ve got a good idea of what this game is all about. If that word picture doesn’t do it for ya, we’ve got some video below.

We’re still not sure about Momonga as a whole. If you don’t dig pinball at all, you probably won’t dig this. But the visuals are off the chain. See if it clicks with you.