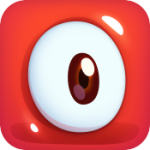 ZeptoLab makes charming games. It’s kind of their thing, judging by Cut The Rope’s eminently marketable Om Nom. The studio’s latest, Pudding Monsters ($0.99), is certainly charming—it practically oozes character. It just lacks a little something else, a bit of the fun factor.

Aside from the flavour, you might have heard this one before. Pudding Monsters is a puzzle game about sliding pudding into other pudding until it forms one massive blob of eyes and goo. Ideally said blob will wind up sitting on top of three star tiles, thus achieving the coveted three-star ranking. There are variations, there are challenges, but it’s all a bit by-the-numbers. Still, if you’re looking for a game about sliding pudding into other pudding, you probably can’t do better.

After all, I wasn’t kidding about the character. The big, bouncy puddings are dressed up with giant moustaches, sleeping caps or snail hats. They slime and jiggle and wiggle their way around the screen. They babble in nonsense language, and the music jingles happily. One could go so far as to call the whole thing sprightly. 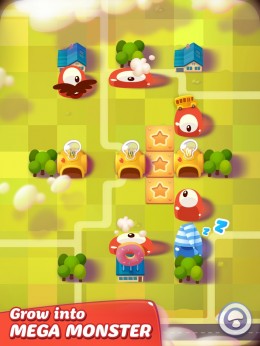 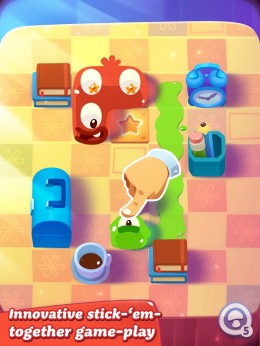 But man cannot live on charm alone, and Pudding Monsters doesn’t have quite enough else to offer. The puzzles are straightforward. There are, generally speaking, around three obvious groups of pudding to merge. Decide which ones to swipe first, and which direction to swipe them in, and you’ll already be most of the way there.

There are different kinds of pudding, each one less edible than the last. The first slides normally, stopping when it hits something or flying off the edge. The second is asleep until you hit it with another pudding. A third leaves exceptionally unappetizing slime behind, slime that will stop your other so-called puddings in their paths. These and a few others mix up the challenge in a variety of adorable ways, and the game uses a pleasantly light touch in teaching you about them.

Getting through all 75 levels is rarely a burden. This is one of those games where sliding through without getting the best ranking probably means you’re doing it wrong. Getting through with all three stars on each is tougher—sometimes significantly, though the difficulty curve can be a bit wobbly. Not so wobbly it wouldn’t be a pleasure for younger players at the most basic level, though.

If you’re looking for something more complex there’s another challenge, and that’s where things get kind of interesting. Each Pudding Monsters level has an extra goal: crowns. Getting a crown requires that you earn every possible ranking in a level. Once you’ve mastered the art of getting three stars, it’s sometimes pretty hard to figure out how to get zero stars, or one or two. It messes with the whole star-ranking paradigm in a very cool way.

Take that and a list of well-curated Game Center achievements and you’ll probably be able to get a couple hours of fun out of the game. They probably won’t be the most satisfying, but it’ll be good, gooey fun. Though the puddings themselves would object to this characterization, think of Pudding Monsters as a tasty snack—it might not keep you fed for long, but it’ll get you through a break or two. ZeptoLab has executed the recipe beautifully; it’s just too bad it was rather bland from the start.