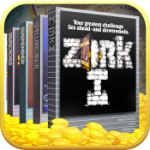 The first time Lost Treasures of Infocom (Free) hit the scene it was 1991. The treasures weren’t actually all that lost at the time —all the games had been published in the ’80s and Activision had only dissolved Infocom two years earlier. Now, over twenty years on, it seems a bit more reasonable to call them lost.

“Treasures" isn’t much of a stretch either. Interactive fiction is still chugging along nicely in some of the quieter corners of the gaming world, but there’s no doubting that the text adventure was in its heyday in the 80s. Zork, Trinity, A Mind Forever Voyaging—Infocom’s games defined a genre. If you’ve ever typed your way through a game you’re probably playing something inspired by Infocom’s parser, if not its games. From standing in an open field west of a white house all the way to depths of cyberspace, Infocom explored the universe. 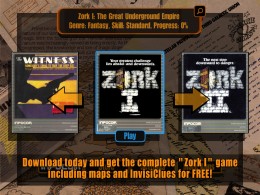 If you’ve played any of the studio’s text adventures, you know what you’re in for. If not, picture, well, a complete lack of pictures. These games are great examples of what you can do with enough descriptive text. In a lot of ways, they’re the precursors to the point-and-click adventures of more recent years: compelling stories, interesting scenes, and a lot of puzzles that can be solved by picking up a random assortment of items and hitting them against one another until something useful happens.

Lost Treasures of Infocom contains an outstanding selection of games— a full four Zorks, Planetfall, Enchanter, A Mind Forever Voyaging, and a good twenty others (including the decidedly dirty Leather Goddesses of Phobos). There are a handful of classics missing, most notably my personal favorite, Hitchhiker’s Guide to the Galaxy, but it’s a strong collection nonetheless. You can buy the games in small, thematic collections, but there’s good stuff in almost every single one. The full library might just prove to be the smarter purchase.

The part that’s blowing my mind is just how well these games have made the translation to iOS. Yes, you could play them in Frotz (Free), assuming you had the files from a previous release, but you probably won’t want to once you’ve had a chance to play with all the toys Activision has included. 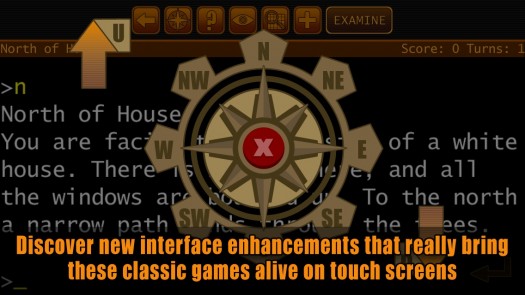 Someone’s put a lot of time into ensuring the games play exceptionally well on mobile. The on-screen keyboard is a necessary evil, one that’s ameliorated by a great little auto-complete feature. It’s context-sensitive, so if you want to whip something from your inventory out in a pinch, the game will probably predict it by the time you’re one or two letters in. That speeds things up nicely, as does the ability to set up shortcut buttons for commonly used words like “examine" or “take." There’s also a lovely compass so you can skip typing “n," “w" or any of those other cardinal or ordinal directions. Perfect for those mazes of twisty little passages.

Then there are the Feelies—the books, manuals, brochures and other tangible flavor items once included in the game box. You’ll need some for reference, when you need a security decoder or a tide chart. Others just paint a nice picture. All of them, however, are duplicated beautifully. If you’ve ever wanted a close look at a postcard from Ramos II, you’ll have your chance to take a look, zoom in, and take it in in its full-color glory. There are also full maps for those moments when you really need a spoiler. 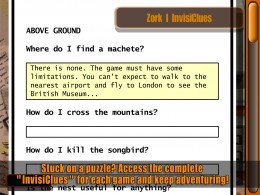 If you need even more help, you can hit the InvisiClues. These are the original “spoiler tags" – hint books full of answers that are only revealed in pieces as you need them. If you need to know what to do with the skiff, how to get into that little white house, or where all the dirty bits are, you’ll want to put down the extra little purchase for the full collection of clues.

My only complaint—aside from the distinct lack of the Hitchhiker’s Guide— is the look of the UI. So here’s the thing: I’m really excited to be able to play these games, some of the first games I ever played, on my phone. How crazy is that, right? But they stand on their own, these games. They aren’t beholden to nostalgia. So why the monochrome? I don’t need to be reminded of amber monitors every time I play.

It’s a small complaint, though, in a whole pile of good times. If you’ve played these games before, the app makes it that much easier—and you might just find a treasure or two you’ve missed. If this is your first time, Activision has put together an experience that’s easy to dig into. It might take a little adjustment to get into the interactive fiction swing, but it’s well worth learning the language.