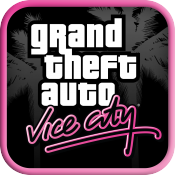 When Grand Theft Auto 3 hit the video game scene over a decade ago, it caused a pretty big splash with its shift to 3D action as well as the elaborate (for its time) narrative being weaved in Liberty City. However, I think Rockstar really started to hit its stride when it released Grand Theft Auto: Vice City. Similarly, when GTA3 ($4.99) debuted on iOS last year, we thought it was a pretty good port of the PS2 title with the exception of its touch controls. However, with the release of GTA: Vice City ($4.99), Rockstar has delivered a refined port with improved controls, nuanced improvements to the visuals and gameplay, all with the great story and totally awesome soundtrack that made it popular ten years ago. Other than some lingering control issues, Vice City is well worth checking out for a blast to the past.

If you’re one of the few people that have never been exposed to a Grand Theft Auto game, I’d advise you to check out our review of GTA3 for a quick recap in regards to general gameplay rules and overarching story architecture. In regards to Vice City, the same open-world freedom to do whatever you want still exists and translates well to iOS. New features such as an improved auto-save function, the ability to instantly replay a mission if you fail, and iCloud save compatibility make this version a bit more friendly to play in this day and age (and even has a few tricks that GTA3 iOS didn’t have when it first came out). 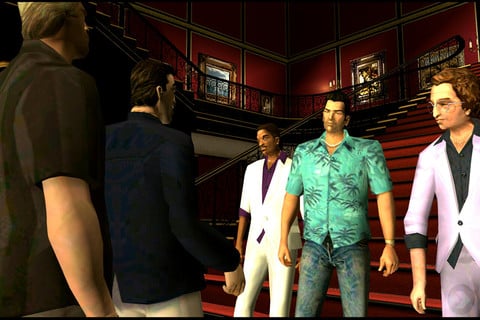 Just as was the case with GTA3, folks playing Vice City will experience a deluge of on-screen virtual buttons. Some buttons are contextual and only appear when they need to (such as the carjacking button), while others (such as the virtual joystick for movement) are always present. While the button schemes look intimidating for the initiative, Rockstar has put a lot of work into trying to make the situation bearable. While some folks averse to virtual buttons will still be turned off, for others it mostly succeeds.

For starters, every button and on-screen element (including the mini-map, tutorial messages, and health bars) can be moved around the screen in any way you wish. In addition, buttons can be resized to various levels, allowing you to make actions that are important to you stand out more. Additional options like left-handed options, auto-aim tap-to-shoot (which will remove one button from your screen) and tap-to-aim round out the control options. Tap-to-aim in particular is an interesting addition, as it replaces the previous toggle aim found in the console version and works well with the innate auto-aim to make taking out bad guys easier.

While the above options will alleviate some of the issues with touch-based controls, the simple truth is that it can’t fix everything. Just as is the case with previous ports, there’s a certain amount of precise movement and reaction lost with the lack of tactile input. This issue becomes a problem particularly during the heavy action sequences, such as when you have to take on multiple enemies head-on or when you’re in a chase mission having to damage or destroy another car. Also, the heavy reliance on auto-aim also shows that the developers recognize that it’s simply harder to play these types of games on iOS devices.

Otherwise, Vice City plays like you’d expect for an iOS port. Visuals are improved but not in a drastic manner (there’s only so much that can be done with graphics originally conceived a decade ago). In addition, the phenomenal soundtrack remains my most favorite port of the game, with a stellar selection of themed radio stations full of 80s hits everyone should know. As with the console version, you’ll get a lot of enjoyment simply driving around Vice City listening to every radio station. It’s also important to remember that this is the full version of Vice City in all its glory, with tons of content, hidden items, side missions, and a whole city to explore.

A lot of the appeal from playing ports on iOS is the simple fact that you get to play whatever the game is on your phone regardless of any pratfalls that emerge from the translation process. With GTA: Vice City it also helps that the developers have put a lot of time and effort into attempting to address the issues that have occurred during the porting process. Sure, the controls are still not ideal for an iOS game, but they work and allow you to experience the awesomeness of the game. There’s also the simple fact that Vice City is an amazing game in most regards. In this regard, the high points far outweigh the control issues, making Vice City for iOS a no brainer for most gamers.