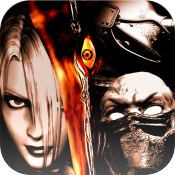 Fighting games have really emerged to become one of the most popular genres on iOS. If you had told me that back in the early days of the iPhone, I wouldn’t have believed you. But somewhere along the way developers have found a way to make fighting games work through a combination of responsive virtual button controls as well as some ingenious tricks to map the typically complex input combinations that fighters are known for into just one or two taps and swipes.

This year saw ports of a couple of different classic fighters that are really cool to be able to carry around in your pocket. We also got an updated version of one of last year’s best fighting games, as well as a new entry for iOS that pits two of the biggest fighting game franchise rivals against one another in the same game. Below are the fighting games released in 2012 that had the biggest impact on the genre.

SOULCALIBUR, $14.99 – [Review] – [Forum] – This game was a landmark release for the Dreamcast back in 1999, and more than ten years later it feels just as good on my iPhone and iPad. Everything is intact just how you remember it if you were a fan of the game originally, and while the initial release was somewhat technically imperfect a later update smoothed things over and restored the beautiful 60 frames per second that made the original game standout so well.

MARVEL VS. CAPCOM 2, $4.99 – [Review] – [Forum Thread] – One of Capcom’s cult-classic fighters arrived on iOS this year, and although it is definitely showing its age there’s still really nothing quite like carrying it around in your pocket. Marvel vs. Capcom 2 takes a staggering list of fighters from both the Marvel and Capcom universes and pits them against each other over the top moves and obnoxiously flashy supers. It’s not the most well-balanced fighter in the world, but it’s definitely among the most fun, especially when playing against other people.

STREET FIGHTER X TEKKEN MOBILEã€€, $2.99 – [Review] – [Forum Thread] – [TA Plays] – Capcom has had great success with their Street Fighter games on iOS, and this mobile version of the console hit released this year takes things to the next level in many ways but also takes some steps backwards. It’s still a ton of fun, and having fully 3D character models and backgrounds is a big visual improvement from previous games. An iffy online token system and lack of playable characters brings things down a bit, but it’s still amongst the best fighters available on iOS.

THE KING OF FIGHTERS-i 2012., $0.99 – [Review] – [Forum Thread] – Last year SNK Playmore took on the king of the iOS fighters, Street Fighter IV, and came out swinging with King of Fighters-i. It felt nearly identical to Capcom’s fighter in controls and interface, but offered up a huge selection of classic characters from the various SNK fighters from over the years. This year’s version kept everything great intact and added a bunch of new characters and online multiplayer in the mix, making it a serious contender for best iOS fighter.