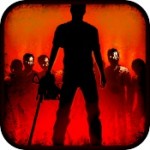 There is no hope of survival. Either you keep going, one step after another, or you die. This is the truth of most zombie films – that oft-promised sanctuary just doesn’t exist – and it’s also the truth of endless runners. Most runners don’t acknowledge that underlying horror. Into the Dead (Free) embraces it.

It is a game that thrives on commitment to its experience, both from its developers at PikPok and from its players. You can turn the sound off and grind your way through for coins and unlocks. Or you can pop in a pair of headphones and listen to your own ragged breathing as you push through zombie-infested fields and forests, one individual alone, surrounded, and without any hope of rescue.

If you buy into the experience, it’s an impressive one. You stumble along in first-person, injured, perhaps, by the helicopter crash that you’re fleeing. Your steps are heavy, you’re bent over in pain, you’re unarmed. Zombies shuffle almost imperceptibly along, not particularly motivated to chase you down but perfectly willing to reach out and grab you should you get too close. 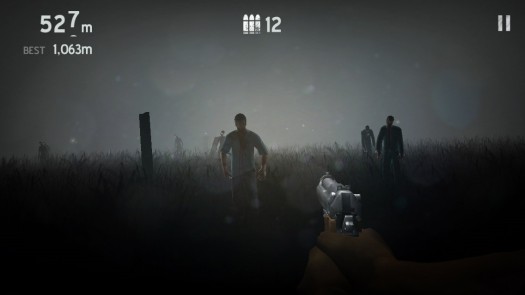 There is a visceral intensity to the game. If you graze too close to a zombie you stumble, quite possibly careening into another. You might empty a gun you’ve found into the walkers in your way, then see a supply drop nearby but unreachable, a span of corpses between you and it.

Eventually, you will stumble into the waiting arms of a zombie, and you will die.

The experience gets distinctly less atmospheric from there. You’re rewarded for your success with coins. Those coins can be used to pay for perks, which cost little and last just one round. It’s easier to survive when you can pay to start with a gun, or to jump ahead 1500m, hold more ammo or find more weapon crates. If you only use your coins for perks and you don’t insist on using all four every round, you’ll be fine.

Coins can also be used to skip missions or unlock new weapons early. The second is nearly pointless, the first can be a good idea. Some of the missions are fun, or can be completed in the normal course of play. Others are mind-numbing. Along with the zombie-slaying Massacre mode, they add some much-needed variety to the game, but it’s not a game that goes well with endlessly grinding certain types of kills. That’s the sort of thing that takes you right out of the moment.

The same could be said of the advertisements shown in-between rounds and in menus. For a game that’s so good at sucking you in, these break the immersion in a tacky way. Buying IAP won’t disable the ads currently, but Pik Pok is planning on adding that option in a future update, so it remains a minor annoyance for now.

Even if you hold tight to the atmosphere and play just right, the moment eventually stops being enough. That’s the thing about horror – no matter how intensely it begins, enough repetition will eventually grind it down to a discomfiting banality. There will come a time you’ll tire of traversing the same cornfields and forests, weaving through the same ever-growing horde, and given the game’s relative lack of variety, that time may be sooner than it would be in most runners.

Regardless, Into the Dead is well and truly worth the download. When it works, it works unbelievably well – and with no asking price for those early, heart-pounding moments, there’s absolutely no reason not to get this game.