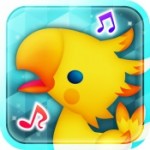 When Square Enix first released the 3DS version of Theatrhythm Final Fantasy in the US this summer, it was a welcome departure from the standard fare we’ve come to know from the Final Fantasy name. Instead of creating a standard RPG, Theatrhythm celebrated the incredibly large catalog of music that spans the entire Final Fantasy series with a good rhythm game wrapped in some light RPG garb. With the iOS port of Theatrhythm Final Fantasy (Free), Square Enix has made some significant changes to the game, both good and bad. While some of the changes (particularly in regards to IAP) might turn-off a lot of players, I think the upgrades outweigh most of the bad, making this a rich music game worth checking out.

Like most music games, Theatrhythm challenges players to perform moves on the screen to the tune of songs. Songs are divided into two stages, Field Music and Battle Music. Battle Music Stages have players tapping, swiping and holding notes with each successful note doing damage to enemies that are encountered. Field Music Stages, meanwhile, follow your lead character on an overworld journey and operate similarly with the exception that hold notes require you to  trace up and down the screen. Finishing songs reward experience for your party, which go towards leveling up your characters. 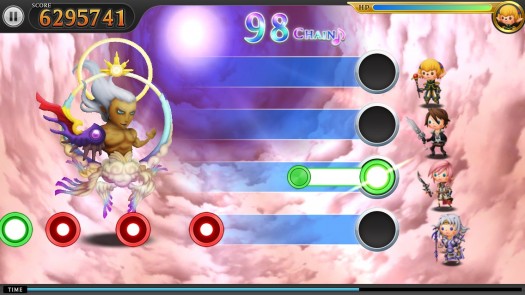 For folks familiar with the Nintendo 3DS version of Theatrhythm, the iOS port makes some big changes to the formula. For one, ‘Series Mode’ (which let you play through 5 songs of a single FF game in succession) and ‘Chaos Shrine’ (which created “random" two-stage missions) are now gone and one of the three main gameplay modes, Event Music Scene (which was accompanied by FMVs) was cut. In addition, most of the RPG-elements of the 3DS version, which allowed players to customize their characters with various abilities (learned with level-ups) and items (earned while playing the game) have been removed, leaving a simplified experience/level-up system in its place. 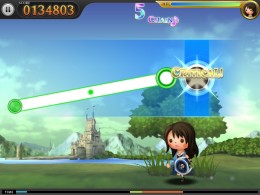 Perhaps the biggest change is the game’s shift from a fully inclusive game with unlockables to a free title featuring two songs to try and the other 70+ songs being available via IAP. Each game in the series has a 4-song bundle available for purchase (the songs in each bundle are not available as separate purchases) while the remaining songs are purchased separately. Considering the large selection of songs available, folks interested in playing all the songs are looking at an excessive amount of money spent on IAP.

However, for folks only interested in their favorite songs or games, I think Theatrhythm’s system is fairly reasonable as it’s certainly possible to pick up a decent amount of songs before the purchases become ridiculous. Still, it probably would have made more sense from a player standpoint to include a “buy all songs" option at some type of discount. A lot of characters are also now available as DLC, but since most of the RPG elements in Theatrhythm have been taken out, you’re essentially spending money for character nostalgia and little else. 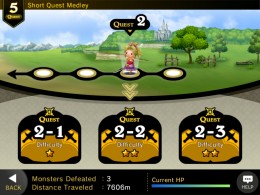 It seems like there’s been a lot sacrificed in Theatrhythm’s move to iOS, but what stays has been greatly refined and streamlined. One of the biggest things you’ll immediately notice is how much better the entire game looks on new iOS devices. Backdrops and characters are much more high-def and levels themselves play out incredibly smoothly. The same goes for the music, which simply sounds better on iOS.

Meanwhile, the included song medley quest system is a big improvement over the missing Chaos Shrine mode simply because every song you purchase may be used in the mode’s random stages (which was a big complaint about the 3DS version). Quest Medley also allows players to earn illusive scores (additional tracks for songs) and trading cards which showcase characters, items, and enemies from all the games. Another improvement is the actual store system, which is far easier to navigate with preview tracks and iOS exclusive songs and characters (although songs seem to take an inordinate amount of time to download).

The most important improvement is the fact that the game just plays better on iOS devices. Taps, swipes, and holds are simply more responsive in this port. While I think some of the improvement is due to the improved specs over a 3DS, it also has to do with the lack of a stylus.

Outside of the above improvements, the biggest addition to this iOS port is the ability to create, upload, and download custom tracks for any song. It’s a pretty interesting feature, and has the potential for a ton of replayability outside of the six scores available for each track. Granted, the actual editor is pretty complicated (although the tutorial helps) and custom scores are currently sparse, but I still think it’s a great addition for those with the skills to actually use the editor.

It’s pretty much a certainty that if you’re a diehard Final Fantasy fan, you’re going to enjoy Theatrhythm. In addition, folks that have checked out the 3DS title should enjoy this iOS port, which improves the visuals and gameplay but eliminates a lot of the extraneous RPG elements. However, the steep IAP costs will probably act as a barrier to everyone interested in owning the whole extensive library of songs this title. Still, I’d recommend everyone at least check out the included free songs, as you might like what you play.