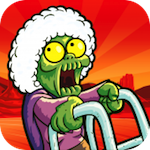 Earlier this morning, Eli and I gave I Hate Zombies a spin. It’s another one of those weird endless racing games where you’re tasked with going as far as you can in a super charged car. Of, course, there’s plenty of hills to climb along the way and ramps that you’ll need to hit. A run ends when you crash your car.

There’s also a coin system. The longer the distance you cover, the more coins you’ll be able to earn. With these, you can buy boosters as well as new cars. We bought a van with a skull on the side of it for the purposes of our play session.

This is one of the better endless racing games on the market, as the physics aren’t as broken as they are in other games. We’re not so sure what’s up with the zombie stuff in this, but hey, there’s zombies in this game, if you’re into that. Check it out: