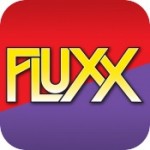 If you’re a fan of card games on the App Store, there’s a good chance you’ve heard of Playdek. Creators of the competitive card game Ascension (Free), we gave it acceptable marks when it debuted over a year ago. Now, Playdek has partnered with Looney Labs to create an iOS port of Fluxx (Free), a more casual-oriented game than its previous offering. Assuming you’re in the mood for a game more reminiscent of Uno than Magic, Fluxx may be worth checking out.

For folks unfamiliar with the actual title, Fluxx is a card game for 2-4 players with an emphasis on changing the rules. Cards are divided into four different types: Rule Cards, Keepers, Goals, and Actions. Players initially start out with two cards the baseline rules of having to draw a card from a pile and playing a card from their hand. However, strewn across the virtual deck are rule cards that can change a variety of different parameters. Some examples are cards that change how many cards you can hold in your hand, the amount of cards drawn during each turn, the maximum amount of cards you can hold at any one point, and so on. 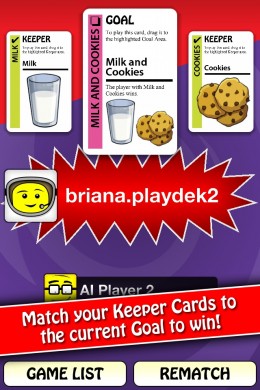 Goal cards, meanwhile, act as the objectives needed to win the game. Goal cards go hand-in-hand with Keeper cards, which are cards with random items on them that are need to be played in order to match the objectives of the goal cards and win the game. For example, you might play a Goal card called “Milk and Cookies," which requires you to have the milk and cookies Keepers played on the field in order to win. Goals can easily be replaced and there are a variety of rule cards associated with keepers and goals as well.

The final type of card, Actions, work towards changing up the layout and ownership of cards. Actions allow you to raid discarded cards, trade cards (such as goals and keepers) with your opponent, draw more cards, discard rules, and so on. While each card type is obviously important, Actions are probably the most strategic as they can easily turn the tide of the match since they can work towards directly manipulating the hands of others.

If Fluxx sounds a bit complicated, you’ll be happy to know that the iOS version comes with a well-implemented interactive tutorial. In addition, features such as a card gallery that let you browse and see all the cards and their effects at your convenience go a long way towards making actual games smooth and enjoyable. Fluxx also offers full matches against AI opponents, which are fast and provide good practice for real opponents. 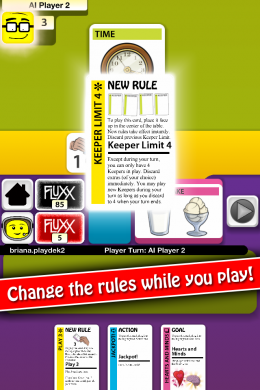 As you can imagine, Fluxx’s main attraction should be actual multiplayer matches against other folks. While the game features decent pass-and-play offline multiplayer, the asynchronous online play isn’t as good as I’d like. Specifically, my main complaints with Fluxx’s multiplayer system deal with the fact that matches take a long time. Most matches will typically take a lot of asynchronous turns which in turn means a lot of time for the game. This lag exponentially increases when you have 3 or 4 players involved. While elements like a perpetual player timer (which runs when it’s the player’s turn and eliminates them if expires) should encourage games to go relatively quickly, it’s still pretty slow in practice. There’s also the fact that the game speed for emulating opponent moves is rather slow, further increasing the time (and potential frustration) of a match.

As far as casual card games are concerned, iOS gamers can do a lot worse than Fluxx. The core gameplay is enjoyable and there’s a lot of room for strategy while still leaving some of the outcome up to chance. However, it’s obvious that Fluxx was meant to be played in-person, and a lot of the fun gets lost in the asynchronous multiplayer. This feeling seems exacerbated by the fact that games take a long time to complete. With this in mind, feel free to check out Fluxx if you have some local friends to play with, but be wary if you’re looking to play exclusively online.