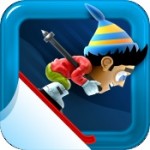 I have to admit, when I first laid eyes on Ski Safari ($0.99) when it released back in April, I had to let out a groan. Another endless running game? Sigh. But I try never to judge a book by its cover (or rather, its genre) so I downloaded the game and took it for a spin. Much to my surprise, there was a ton going on in Ski Safari that totally set it apart from similar titles. The biggest thing was how it controlled. It used just a single “touch anywhere" control mechanism that caused your little skier – who was racing across the snowy terrain as quickly as possible trying to outrun a pursuing avalanche – to jump into the air, and rotate into a backflip if you held down long enough.

This single-touch and single-rotation gameplay really worked well in Ski Safari, as the game was not only about keeping your speed up and avoiding obstacles so as not to be overtaken by the avalanche but also a risk/reward element as you tried to pull off as many backflips and tricks as possible and land them cleanly in order to drive up your score. Something about the simplicity of playing coupled with the subtle depth of high score chasing really clicked with me and Ski Safari.

Besides that, though, Ski Safari had an undeniable charm and a huge variation of things that could happen in the game. You could crash into a penguin and use them as a temporary sled while racing down the slopes, or launch off a cliff and get picked up by an eagle who would take you along for a ride through the sky, along with so much more. It seemed like the more you played Ski Safari the more little details like that you’d come to notice, and that’s not even going into the staggering number of unlockable items and power-ups in the in-game shop or the numerous achievements and leveling system built into the game.

We originally really enjoyed Ski Safari in our review, but since that time the game has been updated several times adding in even more features, unlockable items and environments to play in. It’s simply incredible how much is stuffed into Ski Safari, and right now for the first time ever you can download the game for free. After actually trying out Ski Safari and realizing it wasn’t just another me-too endless runner, I would have had no problem recommending it in its initial state for the asking price of 99¢. The fact it has been expanded so much since then and is available for free makes it a definite must-download, and I have a feeling it’s just going to keep on improving well into the future.