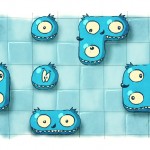 Pudding Monsters is the name of the next iOS and Android game from ZeptoLab, the creator of Cut the Rope and Cut the Rope Experiments. In Pudding Monsters, you’ll be tasked with combining the game’s gelatinous monsters in order to make bigger, stronger monsters. Not all the monsters you’ll combine are equal — some will have special abilities. The slime monster, for instance, “leaves a trail of goo" as it moves around the 2D game board.

From what we gather, Zepto wants to keep Pudding Monsters as accessible as possible as it continues to build its casual audience.

Zepto isn’t dishing out anymore specifics about the game’s mechanics, but we’ll have plenty to talk about when it hits this December 20 across iOS and Android.