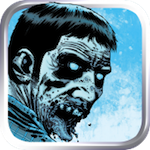 Walking Dead: Assault ($2.99) is a brand new top-down, strategy action game based on the popular Walking Dead brand. Unlike the other games we’ve seen in the universe, this one seems to be grounded in the comics’ plot and characters. For instance, at the start of the game’s first campaign, you play as Rick as he wakes from his coma. Your mission is to gather as many supplies as possible and escape the hospital. Later on, you’ll be able to buddy up with guys like Shane and Glenn and roll as a party.

The ties to the comics extend beyond character and scenario design. The visuals are inky and monochrome and there’s those occasional dashes of dazzling color. For the game, the brilliant colors draw the eye to important events, like say, when a zombie gets a piece of you and to point out supplies like ammo and objects that can be used as a distraction. The story beats are just straight-up presented as comic book pages, which is a neat touch.

Fighting and movement goes down in real-time. You tap to move characters, either as a group or independently. When they’re in range of walkers, they’ll automatically attack them with ranged or melee weapons. If you make noise, a sound indicator also goes off, alerting any walkers in the immediate area to your presence. Setting off distractions that draw walkers can help you thin their ranks. Make too much noise, though, and you’ll draw an entire herd. That’s bad news.

From what we’ve seen from the early game, missions seem to be pretty traditional as far as objective-based video games go. In the first level, you’re tasked with escaping. In the second level you’re tasked with dispatching all the walkers in a contained area while escorting another survivor. In the third, you’re collecting supplies while avoiding making a ton of noise.

As you play, by the way, you also collect a supply “currency" that can be used to level up characters’ health, damage, and adrenaline meters. Adrenaline lets you set off character specific powers. Rick, for example, can headshot zombies for a limited period of time.

When you’re moving as a group the AI pathfinding can be a little weird, but that’s our only control-related gripe so far. Assault’s smart, intuitive tap controls has let us execute on pretty much whatever we want. We’re splitting parties up without a hassle, moving as a group without too much trouble, and setting off distractions with ease. The camera controls are also great; twist, zoom, and rotate work well.

It’ll be interesting to see if the game still has us in its clutches beyond the first six or so levels, and if the scenario design keeps introducing new, mildly compelling things to do while running around in the Walking Dead’s twisted world. Also, will we see any of the Walking Dead’s human drama?

We’ll keep at Assault and bring you a review in the near future. You can catch our gut impressions in the video above. Spoiler: they’re positive.