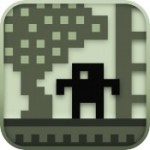 Right out of the gate, 4NR ($1.99) provokes a couple of big, big eyebrow scrunching obstacles to understanding what exactly it is. It opens with Proverb 15:24 (“The path of life leads upward for the prudent, that he may turn away from Sheol beneath."), has a name that could imply it’s a l33t-themed game about a certain British-American hard rock band, and it also looks like it’s a Game Boy game prototype. Ignore all of that, tap to start, and 4NR reveals itself to be something much more straightforward, and also much more vexing, than any of that suggests at first glance.

The “Sheol" referred to in the game’s intro is from the Old Testament/Hebrew Bible, and it just means “the underworld." Hades. Heck. H-E double hockey sticks as my dad — and Mitt Romney — used to say. When the game kicks off you have two paths to take to escape your fate: Either you can ascend to the heavens or you can mine your way down below and try your luck there. Either way, there’s gonna be lots and lots of ladders. Think of it as Lode Runner: Spiritual Edition Unplugged With Extra Salvation Sauce Extreme (in two colors). 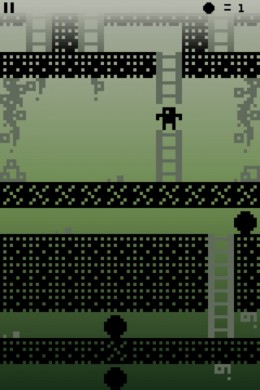 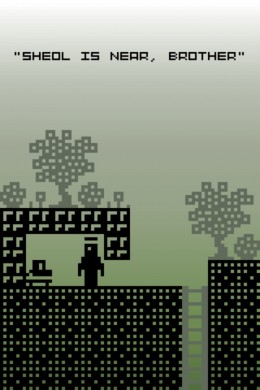 If you go skyward, hell itself bubbles up and will try to suck you down, meaning you don’t have time to dawdle as you navigate each ladder and pit. If you go towards the earth’s core, you can take your time, but you have to collect tokens to dig deeper down — just like in the Old Testament! Due to the Game Boy-like color scheme, you need to pay extra attention to what pits you choose to dive into because you can only crack through dirt patches with certain patterns on them. I can’t really articulate it here in the review, but you’ll learn to recognize the splotchy patterns on them and what the impenetrable dirt patterns look like.

On the surface, 4NR might appear to be a never-ending runner turned on its head slightly, but the heavens and depths of hell aren’t procedurally generated. There’s a pattern to learn to reach your ultimate spiritual destination, and you have to figure that out the old-school way: through trial and error.

And due to the sometimes doofy controls, expect lots of the latter. 4NR eschews the traditional virtual buttons for something much more intangible: swipe in a direction to walk that way, swipe up or down to climb ladders, and poke your guy to make him jump. Sometimes, usually when you need to be the most precise, imprecision is all you’ll shake down. That’s why I usually go to hell, so I can take my time descending down — and also they have great parties there so that’s a nice bonus, too.

All kidding aside, this is not a game that will last forever. There are multiple endings, and once you learn the way to the afterworld, that’s it. You can try to beat your own times. Otherwise, there’s not much else.

That’s not a knock against 4NR at all. It’s pretty good at what it does, and doesn’t try to do much else. Why should it?