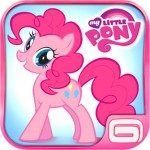 For simplicity’s sake, call me a Bronie: the only part of the label I won’t own is the defensive masculinity implicit in the “bro." I’m also a gender-neutral parent, which just means trucks and dolls, pink and blue, workbenches and kitchen playsets for everyone.

Speaking as both a Bronie and a parent, I have to say that My Little Pony: Friendship is Magic (Free) has its charm, but is likely to frustrate and disappoint young fans and Bronies alike.

The game doesn’t do anything terribly excessive or unusual for a timer-driven three-currency (regular, control, and social) freemium sim. It has levels, quests, achievements, a random-draw game, and terrible writing.

It’s the last one that really got to me. ‘Friendship is Magic’ (the TV show) has built its audience primarily on the quality of its writing. It would be understandable and probably forgivable if the game had little writing in it, especially as it is a city-building sim, but instead there’s a lot of text, and none of it is even remotely clever. 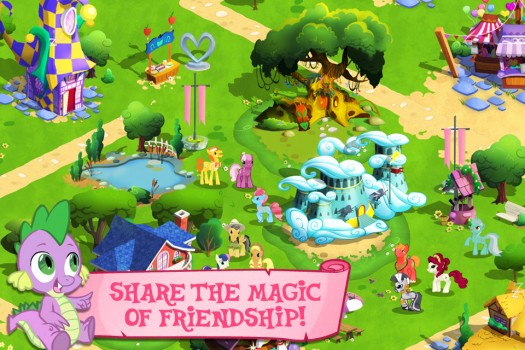 The game borrows, and makes hash of, the plot of the first two episodes of the show. Every single quest has some narrative justification, mostly in terms of getting Twilight Sparkle’s friends to return to Ponyville, but none of it makes any sense. We’re locked in a desperate struggle to save Equestria from Nightmare Moon, and we need Applejack. Maybe she’ll come back if we throw some haystacks down. Really, that’s the plan?

I think storytelling matters to Bronies and young fans alike, but for the sake of completeness, let’s set the story aside. What’s left? Timers, IAP, minigames, and visual style.

There are three minigames: an apple-bucking game (well, apple-catching, there’s no actual apple-bucking), a ball-bouncing game, and a coin collection game in the vein of Jetpack Joyride (Free). 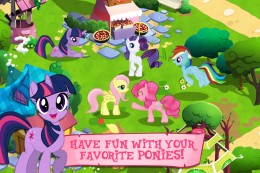 It takes a little practice to become competent at these games, but “mastery" caps out at competence, with no possibility of excellence. The only way to get a remarkably high score is to pay for a score multiplier. This truncated difficulty cure means that the minigames are fun at first, but they quickly become tedious: chores, rather than play.

My Little Pony does a good job with the look and feel of the world: Twilight Sparkle and all of her friends wander about Ponyville, stopping to socialize with one another and occasionally forming large chatty circles. They’re 3D-rendered, but stylized in a manner that looks a lot like the cartoon, and the animations are simple and charming enough to reward zooming in to watch. The collectable aspect of the game is surely it’s strongest appeal: unlocking all of your favorite ponies and watching them play, somewhere between buying the toys and watching the show. Frankly, it seems a terrible oversight that there aren’t any options for costume or hairstyle: pehaps Gameloft was afraid of being “too girly"?

On the other hand, the game’s weak but persistent plot and aggressive IAP model means you have to play a long time before you even get the option to recruit Fluttershy and Rainbow Dash. When you get them, they’re actually inferior to ponies like Mrs. Cup Cake and Bon Bon because it takes longer for them to level up (unless you spend gems to skip the timer…). If you can’t wait, you have to buy your way through all of the quests that lead up to the option to purchase their homes.

Gameloft is clearly trying to court Bronie whales as well as a children’s audience. It just seems to me that they could have done so in an equally profitable but more appealing way if they’d put more effort into the writing and focused the monetization more on bragging rights than on a series of paywalls. In the end, the biggest problem with this game is that it’s charmingly vapid: the exact opposite of Lauren Faust’s reboot of the franchise.