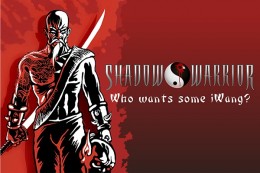 As a big fan of classic first-person shooters, iOS is kind of a haven for me. It offers great ports of early titles that paved the way for modern FPS games which dominate the gaming market. Ports of id Software’s Doom ($4.99) and Wolfenstein 3D ($1.99), Bungie’s classic Marathon trilogy, and even 3D Realm’s controversial Duke Nukem 3D ($1.99) have graced the App Store’s shelves, and this year we can add another to the pile.

3D Realms has posted news on their website that their other controversial late ’90s first-person shooter Shadow Warrior will be coming to iOS. The port is being done in conjunction with General Arcade, who have brought several FPS games based on Doom’s engine to the App Store, most recently Doomsday III ($0.99). Shadow Warrior uses the same engine as Duke Nukem 3D, and also featured similar over the top violence and crude humor that made it notorious with gamers and a hot-button for the media.

According to General Arcade, Shadow Warrior will be released by the end of the year as a Universal app which will also support all the latest devices. They also mention giving special attention to making sure the controls are adequate with lots of options to hopefully suit everyone. We’ll be sure to let you know when Shadow Warrior hits the App Store later this year, and in the meantime stop by our forums for more information and discussion.