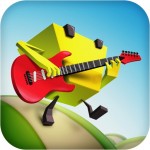 How to explain Arranger (Free)? It doesn’t quite fit into any bucket I’m familiar with. It’s a mini-game collection, a classic adventure and a music game all rolled into one strange-looking package, each part coming together into a surprisingly cohesive whole. It’s about using the power of music to help people, but also about solving the strangest of problems. It features boss battles that involve shooting brains with musical instruments while emotional defenses try to stop you. It’s quirky, yes, but also immensely loveable.

You might think from its screenshots that Arranger is a chaotic mess. In practice, that chaos seems much cleaner. The game has its own logic, visually and experientially, and it hews to it consistently. Still, its look may take some getting used to. Don’t let that stop you; composer Arman Bohn has crafted a weird, wonderful experience that’s only occasionally brought down by reality, and it shouldn’t be missed. 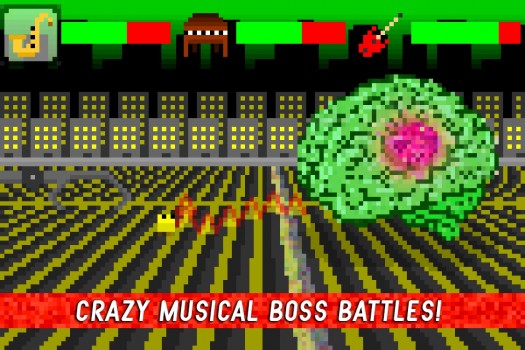 Structurally, Arranger is familiar. You, the little yellow arranger fellow, travel from place to place completing quests, collecting items, and fighting bosses. When you’ve defeated enough bosses, you can challenge the final one and win the game. Its when we start to get into details that things get a little weirder.

The places and people you’ll visit are, at a word, odd. There are the Numeroids of Numerica, a land where numbers rule all and war against the nearby Letterlandians. There are the demonic Feard of the underworld and the happy-faced Happids above. All of them have their own industries and specialties, and each needs help with some difficult tasks. 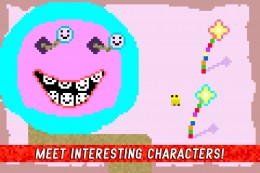 Those tasks make up about half the gameplay, and they’re wildly varied. One sees you tossing crumbs to feed bugs, another has you dressing an unfashionable fellow from a dumpster. Each mini-game you complete is unlocked for later so you can dive in and try to beat your score. There are 24 in all, and each has its own Game Center leaderboard.

In classic adventure-game style, the peoples of Musica are happy to heap rewards on you when you solve their strange little problems. Those rewards are conveniently needed by others in the land, or open up new paths you couldn’t access before. The best are new instruments to add to your arsenal. To be the very best arranger in the land, you’ll need a lot of musical options.

Each area has a boss to battle, more or less. You’re not fighting them, strictly speaking, you’re trying to bring them the joy of your musical arrangements. Each has his or her own tastes and moods, so you’ll need to customize your selection of instruments to their needs. You’ll pick three, and how successful you are at matching them up determines how easy the battle ahead will be, how many times you’ll need to reach them with your tunes to succeed. 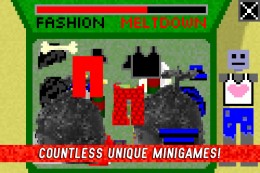 This plays out as oddly as you’ve probably come to expect by this point. You enter a battle arena dominated by a giant brain. The brain has defences that echo its owner’s emotional barriers. It travels up and down the screen, and you try to fire your musical notes directly into its pleasure center before the song ends.

Your instrument choice affects not only how many hits you’ll need to get in, but also the difficulty of your shots. Some of the instruments fire straight and true. Others are more bubbly, and meander across the screen. This makes for a few interesting trade-offs. If all the best instruments for a particular person are really challenging to use, something a little less ideal might work out better.

It’s funny. All this trouble you go to tramping around the world, fighting giant brains, solving strange little puzzles, all of it is in service of making people happy. You’re out to prove that you’re the best arranger in the land, and you’ll be rewarded well for that, but the thing that’s going to win you the kingdom is just going out and helping as many people as you can. Arranger turns out to be an adventure game about empathy, and being a really good person in pursuit of your art.

It has its problems—particularly, a frustrating saving system and two sets of controls that are exceptionally bad in a pinch—but for the most part, Arranger is a very cool, novel game the likes of which we don’t often see. It’s an adventure game that’s logically organized, a game of ludicrous musical combat, and a pile of mini-games that are on the whole really quite fun. Arranger isn’t one of those things you should play if you like adventure games, or music game, it’s one you should play if you like games, period, and the interesting things they can achieve.