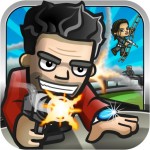 Down for a little mindless self-indulgence? Want it on the cheap? If so, you might want to take a look at Chillingo’s Storm the Train (Free). It has everything an endless action fan could want: guns, trains, gorey deaths, trains, and a huge list of upgrades. Also: trains. And, oddly enough, the ability to go left. Your ultimate goal is to go from train to train murdering everything that moves, but there’s nothing wrong with taking the occasional short detour backwards. Crazy idea, eh?

Even better, it’s one of those free games that arrives without hand firmly in wallet. I’m still digging through the first of three extremely long lists of upgrades, but I’ve never felt like putting cash down on the procedure. Everything comes in time, be it health upgrades, fancy new clothes or drones that can take off an enemy’s head at a dozen paces. The trains, at least, don’t require upgrading. The trains are great right from the start. 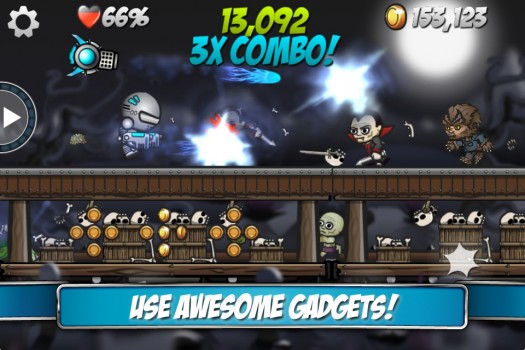 I began my train-storming career with Carrera, the plucky lady of the crew. She starts out with a bit less health than her compatriots, but it’s worth the sacrifice: girlfriend is fast. Everyone has their tradeoffs. Carrera and I have killed thousands of robots, zombies and ninjas, run through thousands of gold in upgrades, and never gotten tired. Now I’m sticking with her whether I’d like to or not: each of the three playable characters has a unique list of upgrades, and starting fresh doesn’t sound too great now that I’m finally feeling properly powerful.

Now, I’m more than comfortable sitting in front of this game and playing mindlessly, maybe watching a show in the background at the same time. But that’s definitely Storm the Train’s biggest issue: it doesn’t demand much attention at all. Run, shoot, jump, shoot some more. Collect coins, open weapon crates. Jump from train to train. That’s the gist of it. 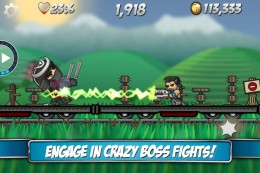 There are a few moments that are a bit more engaging, though. Every so often you’ll run into a point of interest as you race to the front of a given train. Most common is the jumping-off point to the next ride on the rails. There are also boss fights, hostage rescues, jetpack rides, and a rad little thing called the Cylindrical Death Machine. The boss fights take focus, though mostly only of the jumping-back-and-forth-as-necessary sort. The vehicles are a bit trickier. Some mysterious force really doesn’t want you to take any shortcuts, so every time you ride a vehicle you’re constantly pelted by missiles. If you’re distracted it’ll get messy fast.

All throughout your running and gunning, you build up a meter the game calls Mayhem. Every time the mayhem meter fills, you get a free shot of something from your list of gadgets and power-ups. This might bring out a drone to keep you company, stick you in a mech suit or swap your hero out for one of the others (handy when your health is low). You can also drop a handful of change to pull these out freely at any point. Similarly, when you die you’re given one chance to continue for relatively cheaply.

Balancing your budget is pretty much the only strategy the game requires, but at least it’s not a hassle. The flow of coins is steady, and the drain on them is endless. As long as you keep yourself in continues you’ll be doing okay. You can also do the usual purchase-pack thing. Speaking of the usual, Storm the Train also has a hefty mission system, three at a time, with upgrades tied into the stars you earn.

There’s nothing deep about this game, aside from the rabbit hole of upgrades you can go for. I’m not knocking it, though. As mindless games go, this one hits the perfect balance between easy enough to play without much attention and hard enough that it’s not actually mind-numbing. Not bad. It’s not quite where it needs to be to really sink its hooks in, though, with only a few trains to run down and enemies to take out, only a few challenges to experience. Still, the foundations are good, with fun goals, solid controls and a compellingly train-filled experience. Storm the Train gets a lot of things right—if it keeps going on this track, it’ll be a great little run-and-gunner in no time at all.