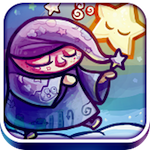 Late this afternoon, Eli and I spent some time with Sleepwalker’s Journey ($0.99), the latest game from 11 Bit. Sleepwalker’s Journey is a 2D side-scrolling puzzle game that tasks you with escorting a sleepwalking kid through obstacle-laden environments. In the early going at least, you’ll be moving platforms around the world to give the kid a clear path to use as he shuffles his way mindlessly from left-to-right. It’s harder than it sounds, as the puzzle design ramps up really fast. You’ll be flicking a lot of gears and changing the kid’s direction quite a bit in increasingly confusing levels.

What we’ve got below is a small taste of the first world. We really just wanted to show off the core mechanics and not embarrass ourselves too much in the process. Sadly, I managed to do so, despite having finished the last level we played before the video. Also, I called the game the wrong name.