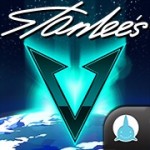 Back in September we first learned of comic god Stan Lee’s Verticus, an upcoming iOS title developed by Moonshark Studios and Lee himself. It focused on a superhero (duh) named Verticus with a special suit that allowed him to fall through the atmosphere unscathed. The goal of the game was to fall from the edge of space down towards Earth, past city buildings and all the way through the center of the planet itself and back out the other side, only to be caught up by gravity and slung back through to do it all over again. This endless falling routine, in turn, was the key to saving all of humanity, or something.

A strange, but interesting premise, Verticus looked pretty cool in its initial teaser trailer, something akin to a mashup of Temple Run and AaAaAA (Force = Mass x Acceleration) ($3.99). Verticus was originally slated for an October release, but obviously that came and went. However, they didn’t go too far off schedule as they’ve announced that Verticus will be launching next week on November 15th, and have released a new trailer showing even more of the game in action.

Verticus definitely strikes me as an interesting idea, and a cool take on the endless runner formula. Plus you know with Stan Lee creating this character and having heavy involvement in the production of the game there will be plenty of passion packed into this project. We’ll be anxious to get our hands on it next week, but until then you can talk more about Verticus in our forums.