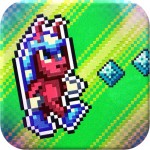 The two easiest ways for folks on the iOS store to make money as quickly as possible: 1) Exploit people’s profound love of nudity. 2) Exploit people’s profound love of retro-style games. Polyroll ($1.99) only excels at one of these, which is terrible news for people who love nudity. (Sorry. Fortunately, I hear there are plenty of places online to see it for free, unless you count the sizable toll it takes on your soul and budding sexuality.)

“Exploit" isn’t quite the right word, but we’ve become conditioned to feel that retro-style graphics are basically a marketing gimmick in 2012. I mean, really, there is no real reason to make games look like old NES or SNES games today unless it’s an aesthetic choice of some sort: You either are trying to evoke the feel those old games had or are simply trying to wrest a fistful of nickles and dimes from players because you know that they’ll think, “Hey this looks like an old game ZOMG!"

All of this is to say: Until you play it, Polyroll might seem like another gold-rushing game trying to horn in on the 8-bit “revolution," but it isn’t. It’s doing something more deft: Actually filling in some gaps and introducing some new ideas to the classic platformers it’s drawing inspiration from. 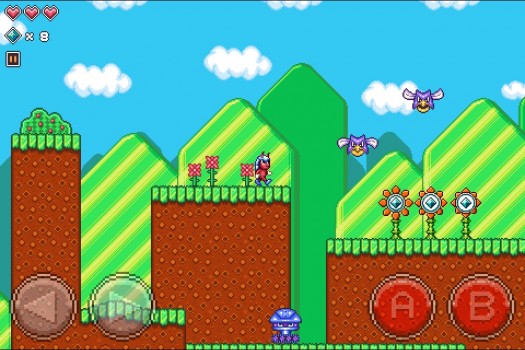 There are 28 short levels, but, as in Mario or Sonic (or Bubsy, because sure, why not?), there’s replay value in trekking back to find all the extra items. Since this is an iOS title, there isn’t a gaggle of these collectibles, there’s just one: gems. They’re very tough to find, but worth groping around for as they unlock levels on the over-world map, which is essentially a straight line with a few branches here or there locked until you find all the shinies.

None of this is where the ingenuity comes in. I mentioned Mario and Sonic (and yeah, Bubsy), but Polyroll clearly is a mash note to Sonic: you defeat enemies by jumping on them, curl into a ball and dash off ramps, and the levels all look very Sonic-like, for lack of a better word. There are bosses (my favorite being the errant plug zapping sparks at you) and it otherwise has a very similar and familiar feel to it. But the most mileage comes from the power-ups Polyroll — a cockroach-looking guy thing — can snatch up: They imbue you with powers, but powers you can only use, really, while jumping.

It’s a risky move to make for an iOS title, because controls for platformers on the platform are notoriously floaty. They’re very precise here, and, really, the biggest drawback is that human fingers aren’t (yet) translucent, which can lead to some dumb, very basic accidental blunders — like you meant to not jump but you jumped anyway.

There are bombs, magnets, feathers, and many other items you can grab to help shift the dynamic against the game’s enemies. Bombs are useful because, obviously, you can bomb your enemies, but they also can blast openings to other areas of the levels. Magnets are great because they can attract gems, which let you amass more hearts, which lets you survive another hit.

It all sounds incredibly straightforward, but there really is something special here in Polyroll. And, well, it is no faint praise to say this about an iOS platformer: Polyroll is damn near effortless and a joy because of it.