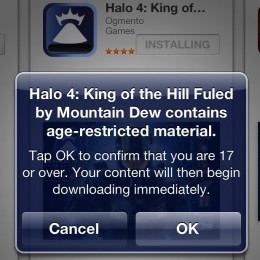 Among last night’s new releases, there was one stand out that just seemed so silly that I needed to install it on my phone first thing today and give it a spin. Halo 4: King of the Hill Fuled [sic] by Mountain Dew (Free) is one of those things that I can’t believe exists, yet, this is the world we live in. It’s made by Ogmento, the company behind NBA: King of the Court 2 (Free), another highly-branded title loaded with geolocation gimmicks. Following a quick warning that Halo 4: King of the Hill Fuled [sic] by Mountain Dew featured age-restricted material and is only appropriate for those of us age 17 and over, I was on my way to bathing in a never-ending shower of double experience. When this game first hit our forums, quite a few people mentioned that they didn’t have any 7-11’s nearby so they lacked the ability to “play" it. Well, fear not, as I’ve done all the dirty work for you. Come along with me and live vicariously through my short lived adventure of securing a nearby 7-11 in the name of, well, Doritos and Mountain Dew, I guess.

The first thing that happens when you open Halo 4: King of the Hill Fuled [sic] by Mountain Dew is you get a Halo-ized map of your surrounding area- presumably zoomed out wide enough to get your nearby 7-11 locations. I’ve got three in my immediate area, and I know there’s more around here, but I couldn’t figure out how to get the map to zoom out further to see what if any activity is happening around me. It seems like the only way you can figure out what’s going on outside of your immediate area is by loading up the leader boards. Unsurprisingly, a guy named “STONED510" has a commanding lead. 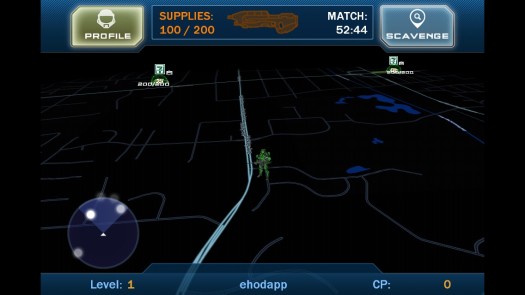 I decided to head to the closest 7-11 to me, which I also had the option of doing some sort of strange “ranged attack" on, but not knowing what sort of freemium resources that’d cost me, I opted not to. As I drove around in my car, the map updated in near-realtime with my location. 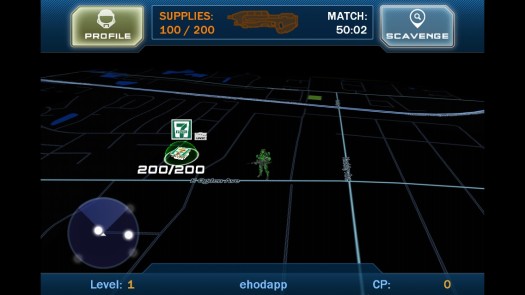 It wasn’t until I was actually in the 7-11 parking lot that things started happening. As soon as I parked my car I was given the option to “use my supplies to attack." So, alright, let’s get down to business. 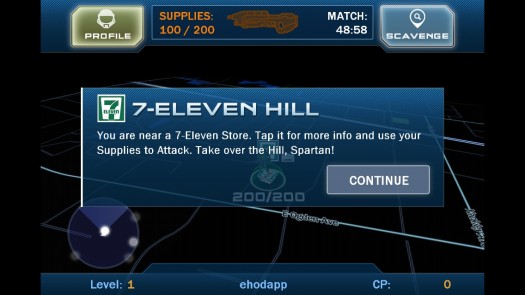 “Attacking" basically amounts to watching as your dude automatically shoots another shielded spartan. You can also strafe left or right while shooting, but I’m really not sure what the point of doing this is. 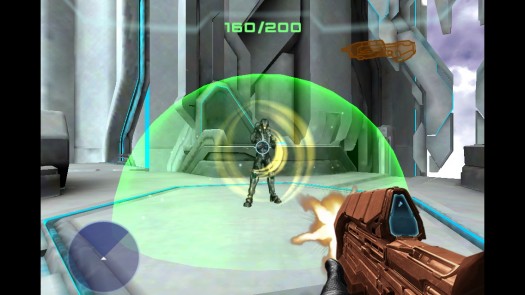 But, of course you don’t have enough supplies to fully capture a 7-11 in one go, at which point Halo 4: King of the Hill Fuled [sic] by Mountain Dew prompts you to “reload your supplies." 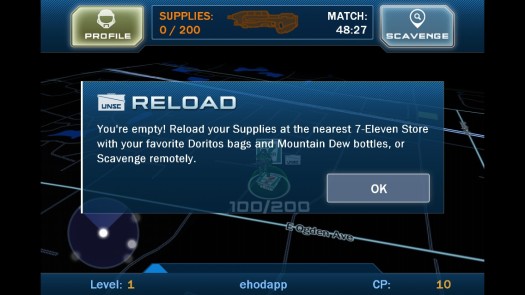 So, I did what any reasonable person would do, and got out of my car, went into the 7-11, and started scavenging for Doritos and Mountain Dew. 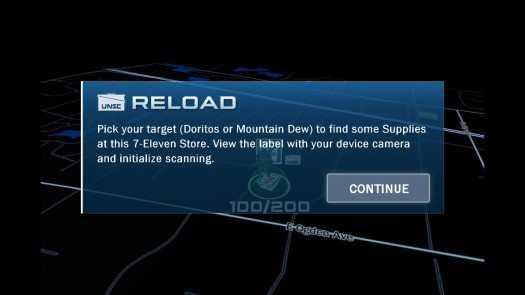 From here, you’re given the prompt to scan either Mountain Dew or Doritos logos, and being closer to the beverage cooler I opted for scanning some Mountain Dew first.

Here’s the good news, even with a bottle of Mountain Dew now in your proverbial clip, it’s not enough. The game then insists you also scan a bag of Doritos. 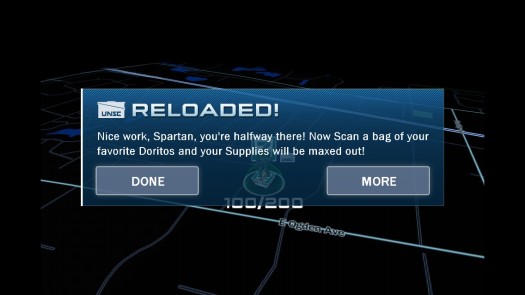 Easy enough, like any American convenient store, there is no shortage of processed corn products laden with cheese dust here.

With that out of the way, my supplies are back to full, and I can get back to “the good part" of Halo 4: King of the Hill Fuled [sic] by Mountain Dew. 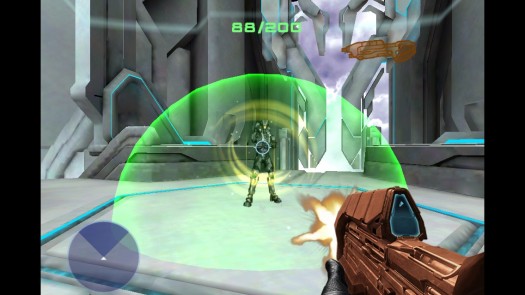 By now you’re probably wondering whether or not I was successful in capturing this 7-11, and, well, good news. 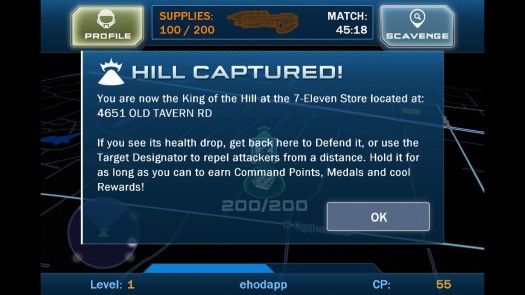 The spoils of the victory include my name on the leader boards of this particular 7-11, the obligation to “defend" it from future attackers, as well as a code for both a premium Xbox theme, something called a “Bulletproof Emblem," as well as some double experience time in the actual real Halo 4 360 game. All of these three things come in the form of those horrifyingly long Xbox redemption codes, save the double experience code which seems to be based on the same system that the under-cap DewXP site hinges on. 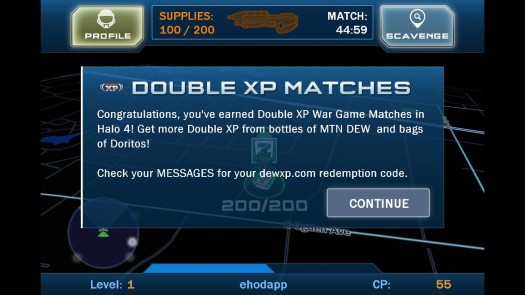 Still, I guess if you’re hard up for Halo 4 experience points, and you’re going to be drinking gallons of Mountain Dew and eating truckloads of Doritos anyway, you might as well “play" Halo 4: King of the Hill Fuled [sic] by Mountain Dew to maximize the benefit of all the promotions taking place right now.