Borderlands Legends ($4.99) doesn’t lean on enough of the series’ strengths. Instead, it turns a lot of them on their heads to its detriment.

But even removed from Borderlands the series, it’s still an unimaginative, often boring game with spotty controls and iffy mechanics that don’t work so well together. In a lot of ways, Legends is kind of a mess.

To rewind, Legends is a top-down strategy game that puts you in control of the original four Vault Hunters across a series of randomized “missions." For the most part, missions are simple bag and tag kind of procedures, each consisting of four claustrophobic arenas that spew monsters and the series’ psychopaths at you in a steady stream.

Fights go down in real-time, so you’re in charge of directing each of the characters at once. The Hunters also have special abilities, and you’re tasked with setting those off at the right time for the best effect. Brick, for example, can berserk and essentially act as a tank, so ideally you want to pop this skill in front of a mob. Mordecai is a sniper that can call in a bird. Ideally, you want to pop this from the back of a fight as often as possible. Pretty simple stuff. 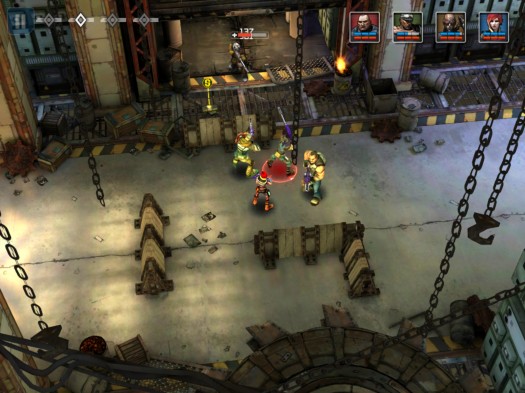 Each character also has a support ability. Brick can shield other players, while Roland, the commando, can heal players — and so on. There’s also a cover system, similar to the one XCOM: Enemy Unknown uses; if you’re behind something, you take less damage and a small shield indicator tells you if you’re covered or not.

On paper, this stuff works together, each system comfortably feeding into the next. In practice, they don’t because everything’s kinda broken. Horrendous pathfinding, for example, makes the cover system basically useless since Hunters tend to jam themselves into geometry. 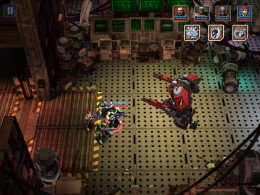 Also, Hunter and enemy AI is silly bad. Both will stand dumbly taking damage when out of their own shooting range. You have to direct them to the enemy, even if they’re staring down one just a step or two away.

In the early going, I had a handful of situations where I almost wiped on a lone sniper because the Hunter AI couldn’t (a) figure out ways around a circular rock and (b) take any initiative while getting bullets sprayed in their faces.

For the most part, the Hunters will respond to anything that directly runs up on them, so that’s a plus. I guess. But then there’s the controls. They just … don’t work half the time. When you direct a dude it’s a toss-up if he’ll bother going there. The multi-touch gestures and attack commands are the same way; they’re just not reliable.

Combined, all these problems make for a big mess. Most of my fights turn into horrible loops of reviving and dying, as each character struggles to not only move around a rock, but also to stay alive long enough to do so. When hunters revive each other, they can keep firing, so that makes this loop possible.

There’s times when everything works, when the level design compliments the play style that was intended and everything clicks. Most of the time, nothing clicks, making this take on Borderlands feel like more of a chore than a game. 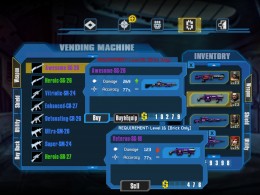 As you play, you earn EXP that can be thrown into characters’ stat trees, leveling up their special abilities. Basically, you increase the power of whatever they do. You also earn cash as you kill stuff, which is needed to buy new equipment from vending machines.

Neither of these things really work as hooks. The special powers are kind of a wash since the game fluctuates between sillily easy (more on that in a second) or hard enough that you won’t be able to do anything other than die and revive in the combat. Cash as opposed to loot doesn’t work, either. There’s no thrill inherent in visiting a chunk of UI to see what you can buy with what you earned, no compulsion to keep playing because the reward is completely static; cash is just that, cash.

The play certainly isn’t the reward — and it’s not consistent, either. The difficulty balance swings all over the place. In the early going, the game is flat-out hard. Around level 15 or so, it swings the other way; you become way too strong and can win without actually even moving the Hunters, which you know, is a problem since this is a strategy game and all. The “late" game introduces some cheesier, bullet-sponge-y enemies that swings the difficulty back again in a unsatisfying way.

The other crazy thing about Borderlands Legends? It doesn’t feel like a Borderlands game. The tone is off, the writing is dull, and it doesn’t have the series signature loot mechanic, which is the thing that informs the feverish, one-more go kind of play that the proper games absolutely nail. Also, Pandoria in this game just feels… incomplete. You’ll play the same levels over and over and over again.

I’ve spent hundreds of hours across both Borderlands games, playing with pals, picking up guns, and grinding on bosses for legendaries. The idea of playing a Borderlands game on a tablet sounds great, but I can’t get into this. It’s too broke.

Even if you’re not a Borderlands fan, though, this is not a recommended game. In theory, it should be awesome, but in practice nothing works like it should. Legends is a sloppy, unimaginative game that isn’t ready for primetime.