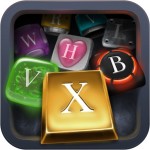 It’s not as though I need another word game. I mean, just look at the embarrassment of riches we’ve had in that genre over the past year or so. But Kieffer Bros. keeps making these little games that don’t seem like much on first look and then sink in their hooks and never let go, so it was a pleasant surprise when Spell Rift ($1.99) landed on my desk.

When the game wrapped up 21 levels later, I was still thoroughly pleased. Spell Rift might not look like much—a small grid, a bunch of letter tiles, and a thoroughly standard scoring mechanic—but it’s what it’s missing that casts the hook. There’s no space to move in Spell Rift’s grid. It lacks the relief of wide open spaces. There are just 35 tiles, and every one that’s wasted is one less opportunity to spell something worthwhile.

Claustrophobia might be the name of the game, but it doesn’t count for much until the stakes are raised. Spell Rift’s first few levels are as typical as it gets, and that’s just not much fun when you have so little to work with. The game pushes you to do your best, but it still starts out too slowly. 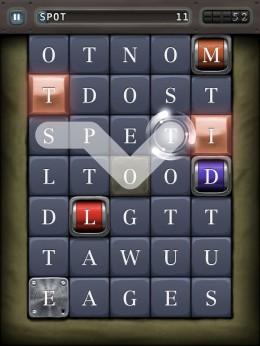 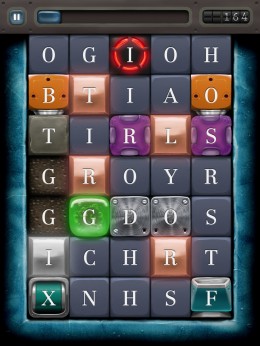 Once the game kicks it up a few notches, you’ll start to see why this is a game worth playing. It’s not the elegant production or the thrill of finding big words. It’s the fear. Bombs start popping up a few at a time, and you’re left to frantically cast around for words to take them out before they count down and then—kaboom. Game over.

Then it’s the viruses, and your vulnerable heart tiles. You can make matches with your hearts and that won’t hurt, but if anything else takes them out, you’ll die. So these viruses come in, and every time you find a word each of them moves one tile closer, leaving a matching letter behind. If you don’t use them in a word quickly enough, they’ll devour your hearts and leave a sea of “I"s or “Qu"s in their wake.

Once these things start working together it’s hard to concentrate on anything but putting out fires as they pop up. For the ambitious, though, each level has three goals, things like making seven- or eight-letter words, or using four bombs in a single word. Most of the time this is just for bragging rights, but three levels make it a bit more mandatory. Completing all three goals will open up hidden levels that take the traps of earlier levels to ludicrous extremes.

Despite its limited levels, Spell Rift never really needs to end. Most of the 21 levels offer unique challenges, and can be played for score and leaderboard position as often as you’d like. That said, a few endless levels would go a long way—some of us like to test our endurance, you know?

I don’t see Spell Rift holding my interest as long as some of Keiffer Bros.’ other offerings, but that’s not much of a count against it. Orba ($2.99), for instance, has been on my phone since day one and still hasn’t lost its appeal. And if you’ve played the developer’s now-absent word game Abca, you’ll find more than a few of familiar elements. But as word games go, Spell Rift is a tense and varied title, one comfortably at home on iPad. It’s certainly a worthy addition to any lexicon lover’s collection.