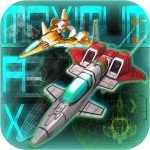 At the beginning of the week, we told you that Cave’s Dodonpachi Maximum would be heading to the App Store, and as of today it is now available worldwide. Dodonpachi Maximum ($3.99) is an original shooter created specifically for mobile, arriving exclusively on the Windows Phone 7 platform back in April. It takes elements from previous Dodonpachi games and slaps them into a “bullet simulator" to offer sort of a best-of-Cave compilation.

We’ve noted before how Cave’s earlier shooters, like the original Bug Princess ($4.99), are great entry points for newbies since their scoring systems are generally less complex. However, I’d now argue that Dodonpachi Maximum is the best place for a bullet-hell beginner to start. Since it’s an original title, it uses sharp, colorful visuals rather than the pixel art of their previous games, which are often designed for much different hardware and resolutions, so can look a bit rough on iOS screens.

This means that Dodonpachi Maximum has a nice contrast and fantastic clarity that can really help you see exactly where bullets are and exactly where to avoid them with your ship’s hotbox. It may not have the same kind of charm that their pixel art games do, but it’s definitely more functional and actually feels like a “bullet simulator" as the game implies. Plus, it’s pretty cool to see a Cave game in such a different style.

That doesn’t mean Dodonpachi Maximum is strictly for the beginner, though. There’s still multiple difficulty settings and 16(!) different Game Center leaderboards to compete on, one for every level and a grand total leaderboard. Players in our forums seem to be really enjoying it so far, and we’ll continue to put it through its paces. Right now it appears to be another winner from Cave, though definitely quite different from their past releases. The game will be on sale through the weekend for $6.99 before jumping up to its normal price of $11.99, so if you’re interested you can save yourself a few bucks by grabbing it while it’s on sale.