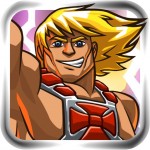 At the ripe old age of 30, the boy that was Prince Adam is now a man. A He-Man, and the Masters of the Universe franchise is back with us in the all-new He-Man: The Most Powerful Game in the Universe ($2.99)  from Chillingo. And this isn’t just a dusting off of the 80s cartoon toy advert you and I grew up with. It’s a reimagining of the cheeseball franchise that clearly understands its audience isn’t 10-year-old boys any more; it’s the immature men (He-Men?) they’ve grown into.

Everything about He-Man: The Most Powerful Game in the Universe draws heavily upon a delicious retro-ironic conceit, and that was a very wise design decision. So wise, in fact, that I suspect it was actually the saucy Sorceress who came up with it.

Anyway, He-Man and his buddies have undergone a slight change of appearance, hinting at the popular ‘super-deformed’ art style prominent during the hallowed days of 16-bit gaming. And that’s not all the game borrows from those wonderful times, back when the pixel was king. 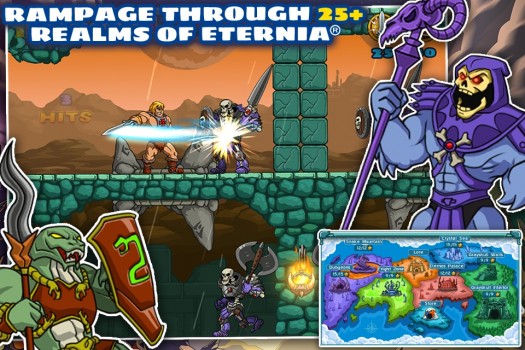 He-Man: The Most Powerful Game in the Universe is a classic 2D platform game in every possible sense, with lots of cell-shading, basic parallax scrolling and lots of little nooks and ledges to climb on when you’re hunting for gems. Quite honestly, Sonic the Hedgehog wouldn’t look out of place in these environments, and nor would Simon Belmont, Rastan or Sir Arthur. It’s rich in traditional gaming artistry, from characters to collectibles and flickering, evaporating scenery after it’s met with your sword. 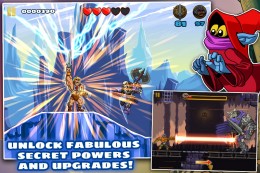 This makes it a very simple game to play, requiring only that you make it to the end of the levels alive before moving on to the next and slightly trickier collection of platforms. Each of the characters you remember from the tacky cartoon make their cameo appearances as required either in boss battles or cut scenes, including Beast Man, Trap Jaw, the friendly magician Orco and even Skeletor himself, who now has the keys to Grayskull (yep, the castle drawbridge apparently has a set of keys that He-Man carries around in his furry pants) as you chase him across Eternia.

We’ve seen dozens, if not hundreds of retro remakes and direct ports of classic games over the last couple of years, but this is one of the few times that a developer has successfully captured the essence of those blessed days while still providing us with a brand new game to play.

A sticking point with such games, as you’ve probably already anticipated, is the controls. Fortunately we’re not handcuffed to a radiator by awful on-screen d-pads and buttons in He-Man: The Most Powerful Game in the Universe. Instead, swiping or pressing on the left-hand side of the screen moves He-Man in the appropriate direction, while tapping on the right-hand side swings his sword. Upward swipes on the right perform jumps (double jumps are included, of course, in accord with 80s-style game mechanics), and as the game progresses other simple and equally accessible gestures are brought in to perform more powerful moves. 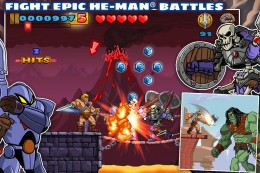 It’s unfortunate that quick access to these power-ups is locked away behind in-app purchases, but not entirely unexpected. You’ll have to replay quite a few levels to shore up the number of gems needed to get the most desirable power-ups without shelling out real money, but the game’s not so greedy that it can’t be done with just dedication alone. Your work will pay off, and the game is endearing enough that you’ll earn stacks of gems purely as a side effect of your gaming enthusiasm.

Every time you kill something or knock something down in the game, gems are scattered about the floor. You can save these up to swap for these new moves, to summon Man-at-Arms with his fancy long-distance weapons, or to call upon the power of Grayskull. The latter is highly recommended whenever you’re in a sticky spot, as it’s not just a useful method of clearing the screen, but it’s one of many hilarious, tongue-in-cheeks moments that give the game so much salty flavor.

The power of Grayskull puts He-Man into a brief bezerker rage, making you not only invulnerable, but doubly powerful. The enemies don’t just disappear after being killed; they’re thrown face-first into the screen, shattering the glass of your display while you smile like Skeletor at their dazed expressions. It’s completely unnecessary, and completely wonderful.

Once upon a time there were very believable rumors that He-Man was a rip-off of Conan the Barbarian, tweaked to appeal to the younger generation. Given the sword-wielding, monster-slaying, hack ‘n’ slash nature of He-Man: The Most Powerful Game in the Universe, those rumors are still just as believable. Considering the lack of a great Conan game, this only makes He-Man all the more appealing to anyone who likes a good old fashioned fantasy romp.

The game is rife with lavish quirks, nods and winks toward those of us who grew up taking this stuff so seriously, but can now look back at it with a wry and friendly smile. By casually lampooning itself, He-Man: The Most Powerful Game in the Universe is entirely accessible to both the young and old alike. It’s a celebration not only of He-Man and Eternia, but a respectful bow to the type of gaming that became so popular when Price Adam was still a boyish whelp, and you’d be mad to miss it. Not as mad as you’d have to be to enjoy wallowing in such naughtily nostalgic nonsense (as I do), but mad nonetheless.