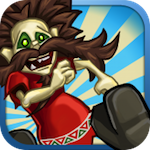 We’ve been keeping an eye on Forest Moon Games ever since it was spun off from Crescent Moon Games with a goal of publishing casual and experimental titles. Hairy Tales ($1.99) is the latest such title to come from Forest Moon Games and certainly fits the bill in both the casual and experimental classifications. In addition to that, Hairy Tales is just a fun and interesting puzzler, particularly with its emphasis on world manipulation and its eccentric style.

Hairy Tales tasks you with guiding a lemming-like character (aptly named a ‘Hairy’) on a world cleansing mission from its starting location to a portal situated elsewhere in the world. Each world is composed of tiled pieces of land, with most pieces being movable, thus allowing you to move the world around to your liking. 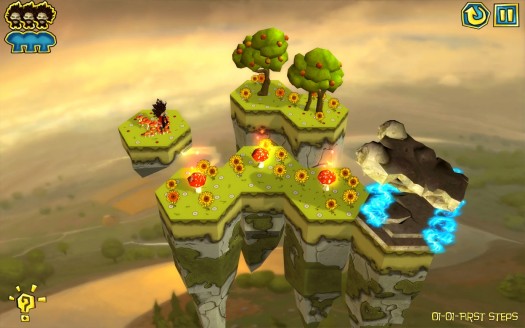 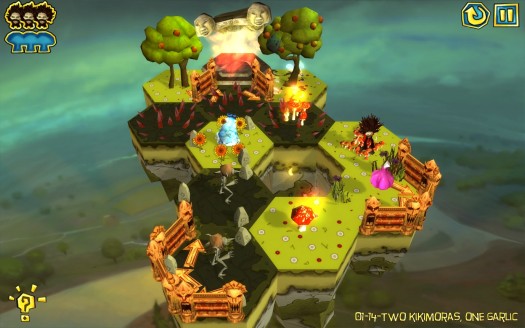 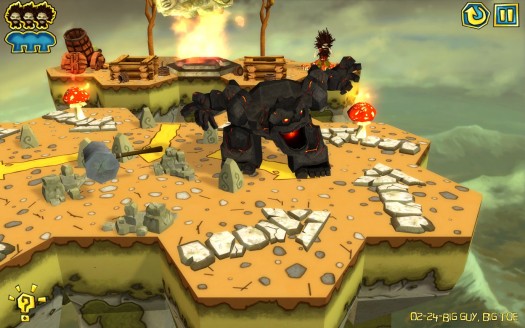 It’s not as simple as just guiding your lemming, as the portal requires a crystal to unlock. In addition, picking up the crystal also allows your Hairy to cleanse the surrounding world, which is tracked and necessary in order to fully clear the level. Finally, each level has optional mushrooms littered across the map which should be collected for completion’s sake.

As if the above wasn’t enough, also littered across each level are elements such as arrows and fences, which force your Hairy to move in a certain direction. As your Hairy will blindly move in a straight line, it’s up to you to guide him to where you need him to go by strategically placing movement oriented pieces in such way that allows your Hairy to collect mushrooms, crystals, and eventually hit the portal (while cleansing the area).

Later levels add more complicated aspects, such as baddies that require other items in order to be dispatched. Also, since the field of play is hanging mid-air, it’s incredibly easy for your Hairy to simply fall off if you’re not paying attention. Thankfully, Hairy Tales gives you three lives for each level, which definitely helps when doing trial-and-error. 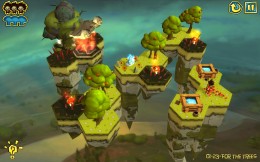 I absolutely love how involved Hairy Tales works as a puzzler. Even though the main objectives are essentially the same on each level, there are a lot of different obstacles and elements to deal with. In addition, I appreciate the fact that there are a lot of different ways you can move the land panels and create solutions. Later levels also force you to dynamically change the world while your Hairy is moving, adding fast reflexes and quick thinking to the mix. It’s always a good thing when a game not only creates clear objectives but also provides the freedom in reaching those, and I think Hairy Tales works well in that regard.

Another area I enjoyed in Hairy Tales is its visuals. While not incredibly important to a puzzler, the graphics and overall motif work well in imparting the quirky feel that the game as a whole tries to give. It’s also nice that iPhone 5 support is available at launch. It looks great on the screen.

While there’s a lot to like about Hairy Tales, there are a few annoying issues in some regards. For one, I’m not a big fan of the controls, mainly because while you can zoom in and out and move around the map, the actual swipe controls to do so don’t feel intuitive. In addition, there doesn’t seem to be a way to rotate the map, which I think is important when trying to gauge angles for your Hairy to take.

Another annoyance is the curious omission of tutorials past the first couple of levels. For example, when I first encountered actual baddies on the field, I wasn’t told that I needed to collect the randomly placed pink garlic clove, which would give me the bad breath needed to defeat the enemy (yes that’s a thing). This sort of trend continues, as you encounter new and modified game elements but aren’t necessarily told what to do with them. More instruction would have still been nice.

Still, while the above issues are annoyances, in reality they don’t detract from the overall experience much. Hairy Tales is still an enjoyable puzzler and a great example of how to integrate a variety of puzzle elements with real-time action, all in a title wrapped in a fantastical weird shell. Suffice to say, puzzle fans should take heed at this latest addition, as I don’t think you’ll be disappointed.