I sometimes wonder if we play Monopoly more out of habit, or some sense of nostalgic obligation, rather than because we actually want to. There’s barely a half-functioning family in the world that doesn’t have some kind of annual board game tradition, and at some point during the year we all give Monopoly a dusting off and joke, between yawns, about how great it’d be if this were real money.

Patience for long, semi-serious games like this is much thinner these days, though. Yes, we dredge it up once or twice a year, but how many of us actually finish a game? More often than not fun fatigue sets in and everyone agrees that whoever’s got the biggest wad right now is the winner, and then there’s a mad rush to pack it all back in its dog-eared box as you attempt to salvage what’s left of the evening. And now we have Monopoly Millionaire ($2.99) finding its way to iOS, with a promise of a “fresh take on classic Monopoly.”

It’s a new take, to be fair, but “fresh” is not a word that I’d rush to associate with Monopoly Millionaire. What this really is – and indeed it’s probably a wise move, even if it doesn’t quite pay off in this situation – is an effort to speed up an ordinary game of Monopoly. Not reboot it, or refresh it, or rebrand it, or revolve it, or reload it, or reinvigorate it. Just get it finished before everyone realizes they’re not having fun. 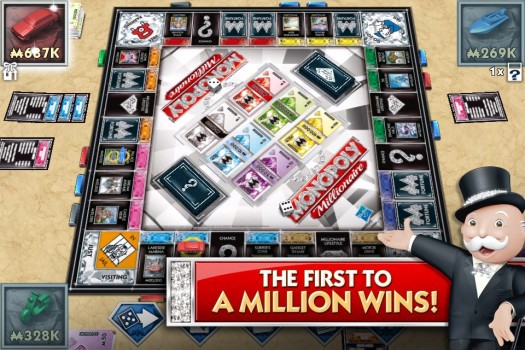 To this end, Monopoly Millionaire sets a clear and definitive cap on the game, based on the fun fatigue we previously discussed. Hit a cool million, and you’ve won. The cap can be changed, should you feel it doesn’t drag on long enough, of course, but the goal is always a bank roll. You don’t actually have to monopolize anything, or bankrupt anyone, which seems like a bit of a non sequitur considering the original purpose of Monopoly, but at least the currency denominations have been suitably increased (otherwise Millionaire would probably take even longer).

The number of players has been reduced to a maximum of four, presumably for the same attempt at alacrity as the money-based objective. This probably isn’t a big deal, but one of the few ways to keep the momentum going in the board game was to get as many people playing as possible, so it seems a shame that the option isn’t there in Monopoly Millionaire. You can at least have any combination within that four, so you can add a couple of CPU players if you want to shore up the numbers. 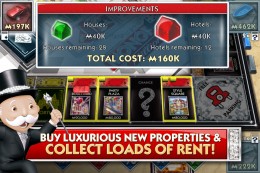 Each square initially offers a fortune card, which typically dumps extra cash in your wallet, or shovels a bit of it out. It’s fairly random what happens, but fortune cards seem to set the pace at the beginning and puts certain players in the lead while leaving others trailing desperately. You’ve no real control over how these cards play out since it’s random, so the skill curve is pretty flat.

Those experienced Monopolizers out there will have learned from watching CPU players in previous adaptations that buying as much property, as quickly as possible, is the key to success. And the same seems to be true here. Rarely is a property landed upon and left un-adopted, but auctions come into play so everyone has a chance to put their name against a piece of land. You can try to play poker during these auctions, and either drive the price up before dropping out, or go hell for leather in an effort to seize fertile ground. This is actually one of the more engaging aspects of play, and makes me wonder if there isn’t a faster Monopoly variant to be found in here somewhere.

The board size has been reduced, removing the stations and facilities that, again, gets you around quicker and pushes the game forward whether it’s comfortable moving at speed or not. The result is that a couple of unfavorable dice rolls can quickly leave you without anything to buy, and collecting a full set of properties is even less likely.

Monopoly Millionaire is a 3D game, but more for the sake of smooth animation rather than actually cruising through realistic cities, and it’s a nice touch that makes the virtual board game feel a lot more tangible. As nice as the dice-rolling and board navigation animations are, you’ll soon find yourself skipping through them as fast as possible (particularly when it’s the CPU’s turn), which makes the view a bit disorientating and jarring. 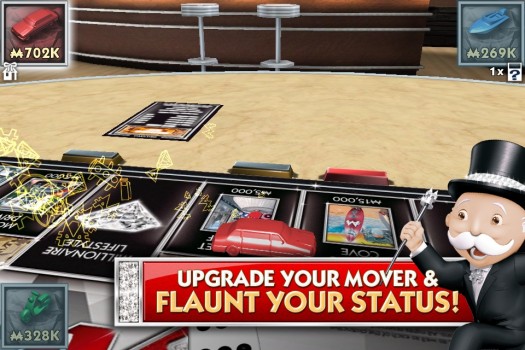 Further cluttering up the screen is a constant stream of text messages, telling you what just happened with each and every move. Combined with the animation skipping, what you’re left with is a never-ending text overlay that’s vaguely unreadable thanks to the piss-pea-green color and busy background.

It seems that every effort has been made to light a fire under garden variety Monopoly in Monopoly Millionaire, but sadly the effort stops there. What most people were interested in was the multiplayer aspects, which include pass-to-play and local Wi-Fi, but no online component. Reducing the board size might be okay, but it’s massively shortsighted to have dropped the number of players and restricted them to being in the same room, so no extra points for the game’s multiplayer options.

Ultimately this is one for diehard Monopoly fans only, who are in the market for a quick and dirty arcade version of the app they’ve undoubtedly already got on their iPhone or iPad. For anyone interested in a digitized board game, this is just too anemic and pandering to satisfy.