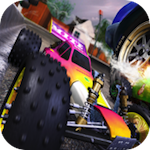 It makes you wonder sometimes how a developer decides which franchises to remake. Not that 1999’s Re-Volt for the PC and consoles of the day is less deserving of a remake than any other game, but I can’t help asking why this one, and why now?

Any why do remake in the mega-popular racing genre? Games like Real Racing are setting a dizzyingly high bar from the outset, and with our minds ready to be thrice-blown by that series’ latest installment, it stands to reason that any studio hoping to compete in this niche has to do something outstanding.

Re-Volt Classic ($5.99) probably does have the potential to at least cruise in the Real Racing shadow, but that potential hasn’t been realized in this version. The further thought occurs, however, that maybe the original has been tamed by time, so any direct conversion is destined to suffer a lukewarm reception, even from fans of the original. 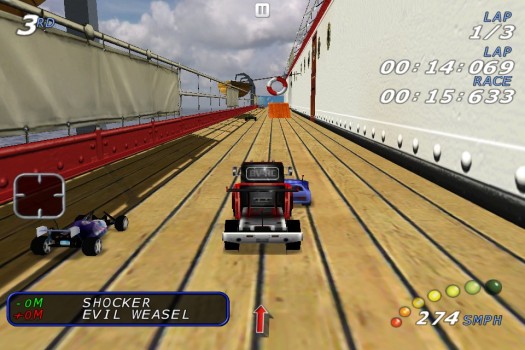 Its saving grace is the concept, which remains solid regardless of a lackluster execution. Getting behind the wheel … well, sticks of a remote control car doesn’t offer a particularly different experience to driving any 3D game car. What it does offer is a very unique set of race tracks, where outrageous ramps, tunnels, obstacles and settings are perfectly feasible and provide you with some immensely fun environments to coat in hot rubber. 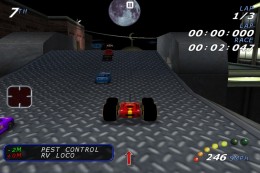 There are a whopping 42 toy cars to choose from, with varying statistics to suit your driving style. The fastest car isn’t necessarily the best car, since most corners are pretty sharp and require stability as much as speed to navigate. With each unlocking of new vehicles, you generally have a small selection of similarly leveled cars to choose from so you can match it to the weight of your driving boots.

Many of the original game’s fans will be glad to hear that the driving is handled very well by the touchscreen adaptation. The controls reflect the simplistic nature of the toy’s inspiration by providing automatic acceleration and unadorned left and right buttons for steering. It sounds as though this might limit the vehicle’s responsiveness, but combined with braking by holding left and right together — and the power slides this initiates on the corners — the remote controlled cars handle beautifully.

However, one flaw in this system must be pointed out. Hit a wall dead on, and you can hold left and right together to reverse. What this doesn’t take into account is steering while going backwards, and the car will often choose its own random direction that leaves you facing completely the wrong way through no fault of your own. As long as you keep reversing to an absolute minimum, it doesn’t impact too much on the action, though. 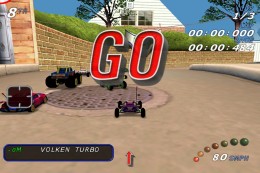 I’ve long felt that the quality of a driving game is most evident in the computer-controlled opponents. Those that are able to make believable mistakes and pull off stunts you’d be proud of if it was you behind the wheel are by far the most enjoyable of the genre. ‘Dumb’ driving games have a pack of opponents that trundle around the track together, taking corners perfectly and never indulging in a short cut. Mess up just once in one of these games and you can write off the race as lost. Re-Volt Classic fits most comfortably into the latter category.

And with no multiplayer option, your adversaries only get faster and more perfect until you find yourself scrapping most any circuit that doesn’t go well from the green light.

While the game is more than adequate in terms of its graphics, it’s also quite lifeless. Admittedly the App Store blurb does point out that the graphics have been borrowed from the Dreamcast version, and then up-scaled to meet retina standards, but the detail is vague and repetitive, with no panache and nothing to admire as you drive around. This at least allows the game to keep the speed up, but some verve is always appreciated in a good driving game.

This insistence on reproducing decade-old visuals stands out as a real shame when you consider that the developer clearly has talents far in excess of the finished Re-Volt Classic product. The menus are quite dazzling thanks to their shiny, fluid 3D visuals, yet nowhere in the actual game do the pixels pop off of the screen in the same way. If you’re going to remake a casually forgotten game, it seems a waste not to try and make it a bit more memorable this time around. Re-Volt Classic, sadly, is likely to be disregarded just as easily as its heritage was.

It’s certainly not the most interesting revival we’ve ever seen, and neither does it forge any new ground in terms of a standalone iOS title. I’d never accuse it of being a bad game — far from it — but it’s simply too pedestrian to get remotely excited about (that’s a bit of a pun to finish things off, and at no extra charge).