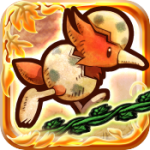 Oh, what a strange an twisting trail an iOS game can blaze. Auto-runner platformer Ivy The Kiwi? ($2.99) is finally available as a mobile gaming experience after it started out as a Japan-only mobile game back in 2010. Between now and then, it’s been on the Wii, the Nintendo DS, and the DSiWare store. And this history lesson is a way of saying that the old girl has still got it, but it’s starting to show some signs of age.

For instance, at first blush, the controls feel completely unnatural. Ivy is a bird-brained bird who, Lemmings-style, will trot to the right until she runs into something, and then pace back to the left. Your only means of manipulating her path for a course correction are three vines. You draw them by touching and dragging a spot on the screen, and timing is essential because if she hits any spikes, it’s game over. It’s made somewhat more frustrating because there isn’t a tutorial. So, if this is your first time with Ivy, you’re in for a bit of a rough ride from the outset. 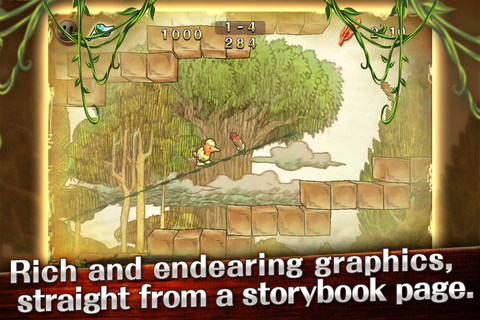 What the iPhone version has that the iPad version doesn’t is perhaps the smallest possible view of the action that the game has had thus far. What that means is that sometimes playing Ivy is a bit like driving in a heavy fog: Oftentimes, you won’t be able to see a hazard until it’s too late to swerve out of the way. I found myself having to start over and over again a few times in a couple of different levels for this exact reason.

Some of this also has to do with Ivy’s learning curve, which isn’t particularly steep, but is on a noticeable incline. Unlike the DS version, here you have to slightly obscure your own view by smearing your digit across the screen. That coupled with Ivy’s brisk pace means you’re giving yourself a couple milliseconds to react to that’s coming. But as I got a little deeper into the game and conquered more levels, I realized the game could be played two ways: offensively and defensively. 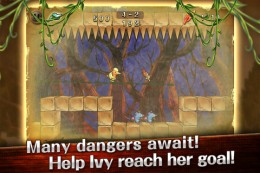 Defensively is how I started off. Offensively is where I wound up. It’s the difference between carefully creating a ramp for Ivy to navigate a few road bumps to flat-out slingshotting her around the stage and hoping you’ll be able to create a landing vine in time before she hits a game-ending obstacle. Eventually it begins to feel as natural as swinging around town in any of the more recent Spider-Man console games.

By the time I mastered this technique, the game was half over and its repetitiveness started to sink in. There are 50 levels (half of the retail version’s), and because the backgrounds don’t change very much, they all start to blur together eventually. And, well, because you are careening around the levels anyway, a pervading sense of same-ness started to wallop me.

To combat that, there is a Mario-like item-collecting element here, with each stage having gold feathers strewn about for you to scoop up. It’s possible to go through some levels without seeing a single one. Sometimes, they seem to exist only to artificially pad the game’s length. In some levels, where the goal is a straight shot from where you start, there’s a “detour” you can take between oodles of spikes just to get them.

Another way to extend Ivy’s shelf life comes with its iOS 6.0 “challenge” capabilities, which allows both free and paid users to compete with one another’s scores. But points and feathers are arbitrary currencies there for replay value only. Honestly, the most fun Ivy offers is in trying to shave off a couple seconds from your own score. Because many of the levels are basic, it turns the game overall into an abstracted version of Olympic ice skating. You could take the most boring route and skate in a complete circle. Or you can opt for something stylish, showcase your moves and fling Ivy about to take home the gold. The decision is yours.