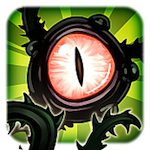 There are journeys in the real world that we can’t make on our own. We can’t travel to the center of the Earth. Most of us won’t walk on Mars. And we’ll never be tiny enough to explore the innermost reaches of the human body. Instead, we visit these places through fiction and film, through games and stories that transport us. Turns out, sometimes we ought to leave well enough alone. If Tentacles: Enter The Dolphin ($2.99) is any indication, the human body is a complete horror show.

That’s not to say it isn’t fun to explore, mind. The journey is a blast, but the destination is a little nauseous. You’d think the game’s star, the betentacled Lemmy, would be the least pleasant part, all eye and mouth and hooked claws ripping his way through the intestines of Dr. Phluff. Not at all. No, when clambering through the chitinous spikes and grasping cilia, or fighting against the malevolent many-eyed bacteria, you might start to feel sorry for poor little horrifying Lemmy. He’s only trying to survive the nightmare world Press Play created. 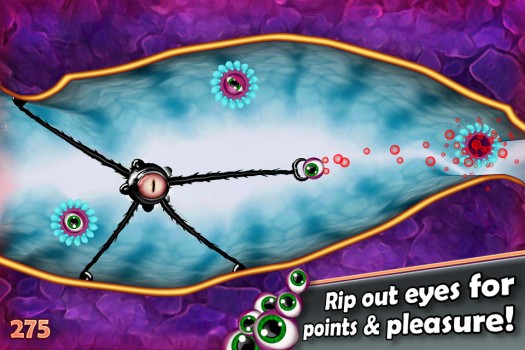 It helps that Lemmy isn’t much of a foreign invader. He’s the failed creation of a mad scientist (how else to describe someone who has become part-dolphin of his own volition?), meant to be tossed aside like so much trash. Instead, he scrambles for freedom, right into the gaping dolphin maw of Dr. Phluff.

He isn’t well-equipped to survive this hostile environment, either. He only has the four tentacles, three of which are used to cling to surfaces. The fourth is his only defense against the body’s denizens with their spikes and shots and eyes. With a tap, you instruct him to rip those eyes out and devour them. It’s not pretty. Mostly, though, he travels and tries to avoid the many deadly traps naturally in his way, the spikes and acid and such. 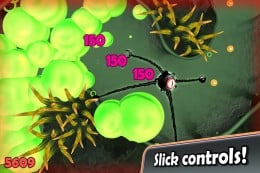 Once you find the rhythm of his motion, controlling Lemmy is great fun. Each time you tap a surface, a tentacle snakes out to grab it. With care, you can turn this into a loping, three-legged gait. In moments that require more speed you can tap wildly on one position until all of Lemmy’s tentacles gather together. When the world starts moving around him, you’ll often find you need to cling and let go without hesitation, accounting for the flow of fluid through the veins or digestive system you travel.

Lemmy’s journey feels aimless at times. You wander through three parts of Dr. Phluff — his digestive system, his circulatory system, and his brain. But you don’t do so in any sensible order, opting instead to dart from the stomach in one level to the amygdala in the next, and back a few levels later. Lemmy is only reacting to the horrific things the good doctor is willing to do to himself to flush the creature out, but it still leaves the sense that you’re just killing time.

There are 40 levels to work through, each with three goals: get through without dying, collect all the collectibles, and complete a single challenge. The challenges are where the magic happens. Sections of each level are sealed off and set to timers: reach the other end before it runs out and you’ll get a star. Some skip the timer and require that you get through without taking damage, which usually means you’re in for a gauntlet of pain. In a game that is otherwise pretty gentle, these moments add a dose of tension. 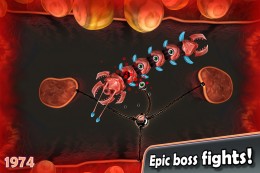 Eventually, Tentacles starts to grind down. It’s still gorgeous, the motion is still fluid and smooth, and the environments are appropriately grotesque, but something feels missing. The difficulty rises a bit too slowly, and Lemmy never evolves, so the levels start to blur together.

For however long it takes you to reach that point, you’ll probably have a blast. There is a great mix of careful creeping and uncontrolled flailing to be had, and enough creative challenges to keep things fresh for a good while. Past that, if you still want more, there’s a smaller pack of levels available for purchase in fresh new environments with fresh new challenges. Even little Lemmy gets a fresh new ability.

Tentacles: Enter The Dolphin was once exclusive to the Windows phone platform, where we could envy its slick visuals and fluid motion. Now that it’s here, we’re free to travel through its fleshy halls ourselves. It’s a journey worth taking, as much as it exposes the horrors of our depths. Let’s give thanks that it’s only fiction and forget all the creepy crawlies that call us home.