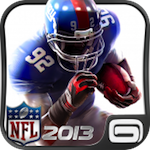 Earlier this morning, Jared and I checked out NFL Pro 2013 (Free). If you’re not in the loop, this is an American football game published by Gameloft. For the most part, it’s functionally Madden system-wise. In the game, you pick plays, run them, hope for the best, and then pick some more. Where it differs is in the passing game: for some reason that we can’t figure out, passing plays force a first-person perspective.

To be perfectly clear, this is a terrible game. Even at its generous price of zero dollars, it’s not worth the download. Animations are clunky, the physics are bad, and its free-to-play mechanics come off as gross. For instance: you’ll be asked to buy a couple of important offensive and defensive sets.

We’ve got some video of the game in action just below. On top of all the aforementioned, take note of the rosters. Someone at Gameloft didn’t get the memo that a new class of players came into the league this year. (They might just be one-year-old as opposed to two; the Colts roster wasn’t shaken up for a bit.)